Is it too good to be true?

Two kids on our Kona MinUte, not an everyday thing

Our path to all-bikes-all-the-time did not always run smoothly. At various points, we got crappy advice (I have refrained for years from listing “San Francisco Bike Shops That I Hate” by name so I won’t start now), and at other points, we were unwilling to listen to good advice. Probably the best example of the latter was the Co-Rider/Bike Tutor debacle. The idea of an inexpensive front child seat for older kids on a step-through frame seemed so promising that we wanted very much to believe it would work. Even though the quite reliable and well-informed owner of Ocean Cyclery was leery of this seat, he installed it for us. When it dumped my daughter in the middle of a ride into a busy street, we realized that reality didn’t always conform to what we wanted to happen. Another depressing example was our issues with the terrible brakes on the first-generation Kona MinUte, which kept failing on steep hills with a kid on board (I’ve been told that the brakes on newer models are better). Our local bike shop, for the record, advised upgrading to hydraulic disc brakes on the MinUte from the beginning. Thankfully our kids were never hurt, although we had some very close calls. We have gotten better about listening since then.

We started down the family biking road before there were many resources or options. Now we have two monster cargo bikes, a Bullitt and an Xtracycle EdgeRunner, which can handle whatever we throw at them. They were not cheap, although I maintain that they are a good value. Part of what we paid for was versatility, and part of what we paid for was safety: there is no question that these bikes were designed to do what we do with them, and both the manufacturers and the bike shops where we purchased the bikes are committed to quality. We learned the hard way that this is something that matters because it is what keeps our kids safe. There are national standards in the US that define what features make a car safe(r). These standards do not yet exist for bikes, and that means that finding an appropriate family bike remains a question of trust.

Even back in the early part of this decade, the prehistoric years of US cargo bikes, there were more and less expensive options, and rest assured that I desperately wanted to believe that the less expensive options would work for us. So when people I had come to trust told me that the bikes I liked were not suitable for San Francisco, and that ultimately a safe and reliable cargo bike would cost much more than I had imagined spending, it was a very difficult thing to hear. I suspect that the only reason we were able to accept it was that we had already had a couple of bad experiences that came from believing there was a way to do what we wanted at a price that we liked. And there was not. We had to decide whether we were willing to (a) make family biking a sometimes thing, (b) risk our own and our kids’ safety, or (c) spend a lot more money than we had hoped. The family biking equivalent of “fast, good, cheap: pick any two” is “versatile, safe, cheap: pick any two.” It’s easy to find an inexpensive bike that’s safe for recreational family riding (short distances, mellow terrain, no weather challenges), or an inexpensive bike that can be used in many situations if you don’t mind risking your life, or an expensive bike that’s safe for daily riding with kids (like every day commuting, especially in annoying terrain). But the Holy Grail of a family bike that is inexpensive, safe, and suitable for carrying kids every day? A bike like this does not exist (yet.) I wish it did.

The fact that cargo bikes are much more expensive than normal bikes is almost always the thing that makes people want desperately to believe in things that are too good to be true. I’ve written about why cargo bikes cost what they do before. Cargo bikes are not expensive because their manufacturers and the shops that sell them are making huge profits; they are not. In more than one case, I have learned that bike shops are run by people who have chosen to make less money than they could in order to make these bikes more accessible. They do it for love. 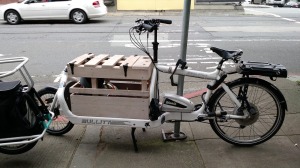 We’ve been seeing more and more bikes like ours around the city: Solidarity!

I have reviewed a lot of bikes on this site. I have avoided reviewing even more bikes. I haven’t mentioned it before, but some of those choices have to do with safety, because quite frankly we have made enough mistakes. I’m not always a huge fan of the bikes I review, but the fact that I write about them at all means that I believe that they are safe enough to ride for at least some kinds of families, even if they’re not a good fit for mine. Over the years, I’ve frequently gotten questions about whether I am going to review a bike that other families are interested in buying. In some cases I haven’t reviewed them because I haven’t seen them locally here in San Francisco, or in Seattle, where my mom lives and where we visit regularly, and thus I know nothing about them (one example: Douze.) In other cases it’s not ignorance that keeps me from writing a review. I have ridden certain bikes that I would not be willing to put my kids on, not even for a test ride. I have been warned off riding certain bikes by people that I trust and who know me well enough to advise that I would not be willing to put my kids on them, not even for a test ride.

The bikes that I avoid reviewing almost always promise the three-fer: they claim to be versatile, safe, and inexpensive. They are often sold direct to the consumer, without the intervening reality check of a bike shop. There is not much point in naming names on the internet, because the manufacturers never last very long. Eventually people realize that the bikes are either not really versatile or not really safe, though more often it’s the latter. In the interim, though, I never really know what to say about the inevitable excitement that accompanies each new cargo bike that promises all the things but that makes compromises that ensure that I will keep my kids from even coming near it. I know that in the absence of reviews, or in the presence of reviews written by people who don’t regularly ride cargo bikes (reviews based on test rides in which the rider did not carry cargo of any kind annoy me), that each new bike makes a wildly compelling promise. Many people are understandably eager to believe—I know that I was—and end up buying a bike that at best will disappoint them. Yet in the slightly-modified words of my beloved dissertation adviser, these bikes ultimately fall of their own weight. They are too good to be true.

(All that said, one of these days I will start checking my blog email again (sorry, it’s been a weird time), and yes, I’m willing to name names off the internet.)

Looking out over our neighborhood

If you are in the market for a family bike, there is no such thing as truly objective advice. Manufacturers and bike shops want to sell you bikes, and they’re pretty straight up about that. Periodicals rely on reviewers who often don’t ride with kids, and they make money from advertising bikes so they’re unlikely to say anything negative. Bike reviews by family bikers are typically written by people who test rode a few bikes, bought one of them, and really like it, which doesn’t provide much basis for comparison or offer a lot of insight into newer models. Speaking for myself, although I have ridden many bikes and am financially unconflicted because my job doesn’t let me make any money or even request discounts, I don’t have anything like the resources to review all the bikes on the market, I think everybody should ride bikes for transportation because it’s cool, I can’t speak to the reliability of any bike that I don’t actually own, and what’s more even on my best day I am wildly idiosyncratic, have kids who have grown out of peak family biking age, and live in a place with unconventional topography.

Who can you trust? A while back I decided to trust family bike shops. Although they definitely want to sell you bikes, they are informed enough to compare different types of bikes, and know a lot more than I do about manufacturing quirks and reliability, which are critical issues that go way beyond what anyone can learn on a test ride. I realize that not everyone has the luxury of living in the San Francisco Bay Area or Portland or Seattle, where good advice is at worst a trip across town away. Yet many of these shops are run by people who will send long emails or talk your ear off over the phone, even though they may not expect it to result in a sale. I took advantage of this long before we bought our first cargo bike. And I have learned that when they tell me something is too good to be true, even though I don’t want to believe it, they are right.