The resolute flatness of San Diego gave us a lot of hope about a promise we’d made to the kids the second that they saw the website of the hotel where we stayed, which prominently featured its bike and surrey rentals. They have been crazy to rent surreys ever since they first saw one in Golden Gate Park, and we’ve never done it because we always ride there on our own bikes, and the weirdness inherent in biking somewhere to rent a surrey made my head spin. But we agreed that we would rent a surrey on vacation and we did.

Having now rented a surrey I can say that it is an unbelievable behemoth of a bicycle-like machine. I seriously reconsidered my burgeoning interest in a longtail or a tandem during our hour-long ride, in fact during the first five minutes of our hour-long ride. I don’t know whether the surreys we rented were junkers that had been permanently disabled by exposure to sea air, maybe so. Matt, who has a physics background and a strong theoretical understanding of such things (although, as mentioned, nil in the way of practical application of same), felt that running two sets of pedals in parallel with a second set of gears and an axle implied all the weight of carrying four people with only half the mechanical efficiency. Then he groaned with the effort of turning the wheel to get us around a 15 degree corner. We had to stand on the pedals to get over a speed bump and brake when faced with the downhill on the opposite side. I have been told that I have a habit of hyberbole but in this case I am completely serious. 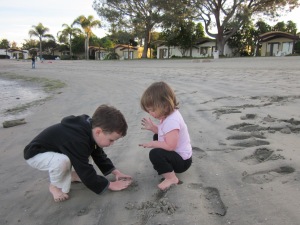 The kids enjoyed the ride for a while but quickly grew bored and asked to go play on the beach. Exhausted with effort of pedaling them there at a rate slightly slower than walking, we agreed.

I’m glad we rented a surrey because it was important to our kids and they enjoyed it, laughing through much of the ride and appreciating a promise kept. And we never had to worry about cars, for the brief period of time when we were on the road. Most of the risk of bicycling seems to center on not being noticed, and no one fails to notice a surrey, certainly not a bright red surrey wallowing along like a beached walrus.

Zero-risk camera-shot on the surrey

Our greatest risk was drivers losing control of their cars as they burst out laughing; we also managed to completely stop a few boats worth of competitive rowers on the bay, who stared at us slack-jawed and pointed. I have grown used to comparable things riding with our daughter on board at home, particularly when I do things like wrap her in a Mylar blanket, and I like to imagine that it keeps us safer.

However none of us wants to rent a surrey again and Matt and I are thankful for that. It was entertaining enough as a lark but it does make me thankful that we appear to have chosen well enough for our first bicycles that we are always pleased to get on and ride somewhere, to the point that our ambition at times exceeds our abilities. We have heard from people that have bicycles less well-suited to them that they are far less interested in riding than we are; it is not fun for them. We could have chosen the surreys of bicycles and I imagine that my brother-in-law’s vehement advice to us to purchase new bicycles well above the price point that novices appreciate as reasonable, as well as his insistence that we avoid even setting foot in certain bike shops, reflected his knowledge that it is easy to misstep and choose poorly when you are as ignorant as we are. 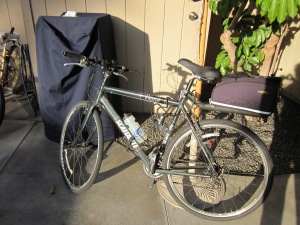 Having asked around among the many people I know who never ride bicycles and in some cases never have ridden one, my assessment of the price point that novices view as reasonable for a starter bike is: $100. I had no perspective on this question one way or the other before I started riding, but having gone down this road I can now say that the price point that would get a novice on a bike that is actually fun to ride as a commuter would be something between $500-$1000, at least in San Francisco (possibly cheaper somewhere flatter, but more expensive if the goal is to haul multiple children or serious cargo), including lights, fenders and a rear rack. That was an easy number for us to accept because we were comparing the cost of bicycles against the cost of a hypothetical second car. For people who are less certain about whether they will ride at all, I would imagine that’s a harder figure to swallow.

I think that the knee-jerk reaction that a price above $100 is unreasonable (which is usually where the conversation goes after I ask for a “reasonable” price) is worth reconsidering. Certainly reconsidering is a better reaction than sprinting off to Walmart, which will cheerfully sell people something like the surrey of bicycles near that price point, to the purchaser’s eventual despair. I can’t think of a single person who would expect that a mattress purchased for $20 would offer a peaceful night’s sleep unless they were extraordinarily lucky. And a bicycle is more complicated than a mattress.

Obviously used bicycles are cheaper but the (startlingly common) assumption that a total novice without daily access to a knowledgeable source could find a good used bike (or assemble one from parts!) is simply not reasonable. Craigslist lays many traps for the unwary, and I have heard now from more than one of my graduate students who tried to follow casual advice to “find a good frame and have a bike shop turn it into the perfect ride for half the price of new” that the best description of that advice would be “recipe for disaster.” Even my brother-in-law, who is a former bicycle mechanic, sent my sister out to buy a Jamis when she wanted a bike. It is true that a Jamis will not turn heads, but it was an excellent value and she enjoys riding it. And she and I are both somewhat contrarian so we appreciate the charms of being underrated.

Can I get off now?

Now that we have found bicycle shops we trust and have some experience and knowledge we could probably do well on the used bicycle market. But we have bicycles now. Even so I can easily imagine how much more poorly our search could have gone without the occasional push in the right direction from my brother-in-law. Knowing him as I do, I realize now that I owe him a box of cheap wine and another of expensive Japanese chocolates.