The Co-Rider (aka Bike Tutor) debacle

I have avoided writing about our experience with the Co-Rider for some time, because thinking about it makes me feel nauseated to this day. But it’s probably worth putting down. 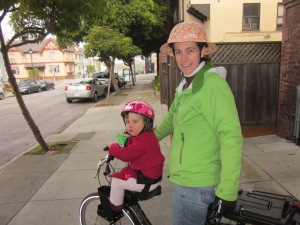 Before we realized installing the Co-Rider was a horrible mistake

I knew when I got my bicycle that I wanted to be able to carry both kids. My two children were heavy enough that even the more “conventional” setups for carrying two children on a bike were not really an option. The Bobike Mini/Bobike Maxi combination looked stellar, but at 32 pounds my daughter was only a pound away from the Mini’s weight limit. This was a shame because we trusted the Bobike line at that point. The Yepp Mini seat had the same weight limit. Bike shops we visited that knew anything about child seats liked the Bobike and didn’t object to the Yepp, although the Yepp had been recalled for safety reasons in the past and that tipped the scales toward Bobike.

I wanted a front seat that could hold more weight. There seemed to be only two options. One was the iBert seat, aka The Green Sled, an instantly recognizable bright green plastic seat that held up to 38 pounds. The other was the glowingly reviewed Co-Rider, which claimed to be able to hold a child up to 5 years.

We have since learned that there is at least one well-respected shop in San Francisco that sells the iBert (Roaring Mouse), and ultimately, none of these things would have been as bad as what happened with the Co-Rider. So from my revised perspective we might as well have just taken our chances with the iBert, especially since none of the proposed horror scenarios seems to have actually come to pass. Although in general I think following the advice of informed people is a better idea altogether. More realistically, we should have given up the idea, accepted that we’d missed the window for using a front seat, and looked for a bike for me that could carry two on the back. 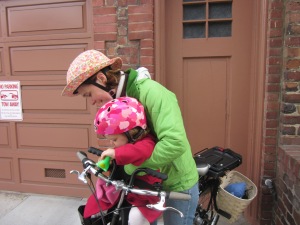 Testing the Co-Rider for stability didn't help any: it seemed stable but would collapse less than 15 minutes later

We then moved to the Co-Rider. It looked like what we wanted, and the weight limit was no problem. None of the bike shops we visited had any objection to installing it, probably because none of them had ever heard of it. The setup looked reasonable enough and it attached to the frame, which was apparently desirable. I had to order it myself but Ocean Cyclery was willing to put the Co-Rider on the front of my Breezer and the Bobike Junior on the back. They were confused as to how it could work on a frame without a level top tube, but the Co-Rider website and literature was vehement that the seat could be installed on a step-through frame, and in fact showed one mounted on what looked like an Omafiets, which had the most sloped tube I’ve ever seen on a bicycle.

When I came to pick up my Breezer the Co-Rider was installed on it but the bike shop was, if anything, even more skeptical about the seat. (This is where I should have listened more closely.) They felt it didn’t have any support at the back and that if the screws loosened even slightly, inevitable from the various bumps and impacts that come with regular riding, that the seat would tip. To test it, the shop owner had spent extra time on the installation and taken his six-year-old on an extended test ride to ensure it was stable. He felt it wasn’t going anywhere but was nervous about the design and insisted that I check the stability of the seat every time I put our daughter in it. His concern was prescient.

What the Co-Rider looked like when first installed, correct position

I rode with my daughter in that seat (sometimes with our son in the Bobike Junior in the back) for three weeks, checking the seat for stability every time we rode because I am paranoid like that. On the third weekend, riding in Golden Gate Park after once again checking the seat for stability before departing (no problem), the screws loosened, the seat tipped up 90 degrees, and she tumbled back out of it nearly into the street.

The good news is that it was a front seat and I could catch her. The bad news is that we were crossing Masonic at Fell when it happened, and even on a Sunday, this is easily one of the most dangerous intersections in the entire city of San Francisco. Even thinking about this experience months later makes my palms sweat and a headache start.

Because it was my daughter and not my son, she laughed it off like it was an adventure ride I’d created just for her and cheerfully rode in the Bobike Junior the rest of the way home. When I called Ocean Cyclery to tell them how right they were they were mortified that they’d ever installed it.

I was left wondering why I had such a different experience than everyone else who wrote about this seat. When I called the distributor in LA to get a refund (well past the return window, but clearly the seat was defective, and to their credit I did get the full refund) he said that I was the 3rd or 4th person to call with a story of a seat failure like this on a step-through frame. The distributor felt that these people were installing the seat incorrectly but I was pretty sure this was not the case for me, because my seat had been installed by a bike shop with extensive experience. I also thought that given that the problem had been identified by more than a couple of people with the same frame, it was time to investigate the seat design or the fabrication. The distributor said he was sending a request to manufacturer to investigate the problem. But since then there have been no changes in the advertising by the manufacturer, which continues to claim the Co-Rider is appropriate for step-through frames.

In the meantime my feeling is that either I got a seat with defective parts, and I am not the only one, or the seat is fundamentally unsuited to installation anything but a frame with a level top tube. Either option would suggest that the Co-Rider doesn’t belong on anything but a diamond frame, at best. It would be impossible for the seat to tip if installed on a level top tube, because the tube itself would hold up the entire length of the seat. I assume that the people who had good experiences with this seat were riding on diamond frames.

If the Co-Rider hadn’t tipped and nearly sent my daughter head-first and backwards into the street (other than that, how was the play, Mrs. Lincoln?) I would have other issues, but they are minor. San Francisco is windy and my daughter didn’t like to ride very fast on this seat, because of the wind chill (both the Bobike and Yepp seats come with optional windscreens). The footrests look impressive but don’t have straps to hold her feet in, so she liked to kick sideways, which at times made the bike wobble. The seat is heavy and rattles when a child isn’t riding in it, and the welds are sloppy. Heavy is understandable given that it’s supposed to hold an older child; the sloppy welds and rattles (and my terrible experience) made me suspect that the seat is poorly made.

I liked riding with my daughter in a front seat, because it was easy to have a conversation and felt intimate. Putting the kid on the front also makes the ride a lot smoother; crossing Muni tracks with a child in a front seat makes the bumps forgettable, and there was never any risk of popping a wheelie on the uphills. I would  have loved to have her there longer and if I were riding a diamond-frame bike, without any need for a rear child seat, we would probably have enjoyed using this seat for a couple of years to come. Admittedly we would have ridden at a very slow pace. After having the seat literally collapse underneath my daughter, however, I can’t imagine ever using it again.

The last couple of weeks have been bad news for biking and bad news in general.

Bad news for biking was having my daughter’s child seat tip over and nearly slide her off into the street while we were crossing a six lane road over the weekend. That seat (the Co-Rider) has been removed for return to the manufacturer. The bike shop that installed it was skeptical from the beginning that it was stable, and I should have listened. Further updates on this experience when I am calmer about it.

She is fine and because I caught her she thought it was funny, but there have been some sleepless nights for me. We took her home on the Bobike Junior, which she loved; she’s too young to be really safe on that seat, but a Bobike Maxi, the seat of choice when we were in Europe, a seat that millions of Dutch children have ridden, many of whom are still alive, should be a good replacement.

That would be, of course, when I stop freaking out about the whole experience, and when the Bay Area is not experiencing severe wind advisories, promising gusts of up to 35mph, not that I have seen any yet. In the meantime we’ve retreated to four wheels for a spell–among other things, we lack a seat for my daughter. We still love biking, but we are less fearless.