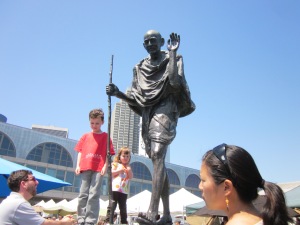 At the Ferry Building, getting our protest on

Last weekend we spent one day driving and one day riding.

We have not yet found a route to Saturday swim classes that feels safe enough to ride with the kids, so we have only ridden the five miles to the pool once. We keep talking about trying again, but change is hard, and the Fell/Oak connectors are terrifying, and the speeding trucks near Mission Bay are so daunting, even on a weekend morning before 9 am. And Matt had a large package at his office to pick up, and we were getting a mystery box and a flat of strawberries a few blocks from there. It was going to be quite a load. Once a week on Saturdays, we drive. 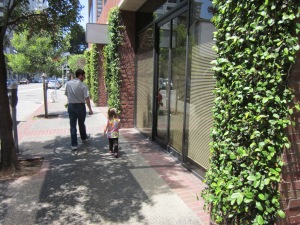 While we were downtown at Matt’s office we took the kids for Mexican for lunch at the Ferry Building, given that it was Cinco de Mayo and our son’s half-birthday. Every year we intend to go to Kodomo No Hi in Japantown to make carp flags as well, but three festivities in one day never work out.

I had forgotten that the Ferry Building farmers’ market is on Saturdays, and it was worth a visit. Although the market primarily seems to sell prepared food, the selection of unusual vegetables and beans is impressive. This is not a cheap market. For value, the Alemany Market under the freeway is unbeatable. But the Ferry Building is worth checking out even so. 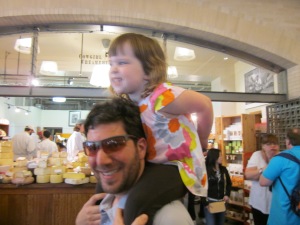 It was hot in San Francisco all weekend (by which I mean mid-70sF). This was a multi-stop trip—gym garage, Matt’s office and the Ferry Building, mystery box drop site—and we rarely do this kind of thing driving. It is surprisingly exhausting to get in and out of the car over and over again. And this was true even though we enjoyed impressively good parking fortune.

Too exhausted to blow a dandelion

By the time we made it home in the early afternoon we were all fried. The kids watched Kiki’s Delivery Service and Matt managed to talk our daughter into a stroller ride to pick up the dry cleaning, but despite walking much of the route, after spending a morning driving we were through for the day.

Sunday, however, was Mission Sunday Streets. We have been working on getting over our fear of the Fell/Oak connectors to the Wiggle. I still can’t imagine riding this route with the kids on weekdays; these two streets are like freeways through the city. But on weekends we can cut around Oak on the way there, while the heavy bike traffic on Fell Street on the way back, plus the new lane markers, make us feel less invisible.

This is a sharrow marker for the Wiggle. Subtle.

So we rode through the park and along the Panhandle then cut across to the Wiggle, crossing Market. Even from the other side of Market Street, we could see the evidence of Sunday Streets—blocked streets and a waves of pedestrians in the intersection. Every summer San Francisco closes off a neighborhood to car traffic on the first Sunday of the month. For three months in a row, Sunday Streets is in the Mission.

With my daughter on the Breezer at Mission Sunday Streets

It has been ages since we visited the Mission. When we drove around the city, it wasn’t worth it as the traffic is unbearable and it is impossible to park a car. Now that we mostly ride around the city, we have been blocked from this side of the city by our fear of the Fell/Oak connectors. We have been missing out.

The parklet at Four Barrel Coffee

I have complained that other cities have more impressive bike corrals than San Francisco. This is true, but I realize now that unlike much of the city, the Mission is putting up an impressive show. There were both regular bike corrals and corrals integrated into parklets, and parklets are thick on the ground in the Mission. One of the most impressive was outside Four Barrel Coffee, which sponsors the weekly parent coffee klatch at our son’s elementary school.

This band was a family ranging from toddler (on the drums) to grandparents.

Sunday Streets closes off much of Valencia then turns down 24th Street for several blocks. This part of town is thick with Mexicatessans, cafes, restaurants, and bike shops. We arrived early, before the line at the artisanal donut shop got too deep, and just as the live music was starting. We spotted our friends’ family triple tandem, and they invited us to see the capoeira demonstration that the mom was doing later. (I sometimes wonder why people who are demonstrably so much cooler than I am consent to hang out with me.) We loved Sunday Streets!

Riding back, the crowds were getting thicker and the day was warming up. I fear sunburn so much that I almost never go outside in the sun without long sleeves, but I forgot on Sunday. I won’t make that mistake again. Matt and our son eventually peeled off to a birthday party at the Yerba Buena Gardens, while my daughter and I took advantage of our unexpected foray to the Mission to stop at Rainbow and pick up obscure groceries. 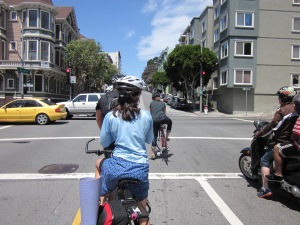 As we rode home, the contrast between the streets closed to car traffic, which were crowded and happy and mellow, and the streets with cars, which were crowded and fuming and irritable, could not have been more stark. I watched a police officer bang on a car window and yell at the driver that no matter how much of a hurry he was in, he was not allowed to mow down pedestrians and bikes. (I thanked her.) 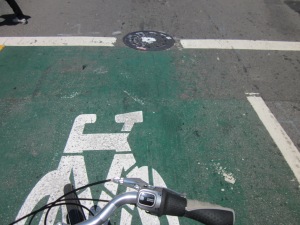 I rode home with my daughter through the Wiggle and along Fell, and although the car traffic was daunting as usual, it was at least respectful. The Fell connector features what I believe is San Francisco’s only bike box, which allows entry to the dedicated bicycle left-turn lane that gets you into the marked bike lanes. From there we entered the safety of the Panhandle.

It’s a tight squeeze, but I can actually fit two panniers under the Bobike Maxi

Despite the fact that we had been riding for a few hours, we both wanted to keep going. So we stopped at a local grocery store for a popsicle for my daughter, who was getting hot, and at our local bakery after that to pick up some bread for dinner. Making multiple stops on the bicycle is so easy I kept trying to think up reasons to go somewhere else, but my daughter was worried that her popsicle would melt, so we headed up the hill toward home. Also I’d run out of pannier space—it’s a tight squeeze under her Bobike Maxi seat.

Two days, two different experiences, and the verdict: the bike is so much better. Three hours of errands by cars left us exhausted, while five hours roaming the city by bike left us hoping for more. We are ready to try the Saturday trip to swim class again.

We are ready to ride.

Even more, we realized that the Mission is accessible to us again. We can visit restaurants and shops we’d long since written off as out of range by riding our bikes. It was a long ride, but not unpleasant. Matt and I are now talking about a date night in the Mission the next time we have a sitter (admittedly this is probably a long way away), but we could also go during the day with our kids. And I think this is the goal of Sunday Streets. The city feels both bigger and smaller to me now. It is bigger because there is so much more we can do, and smaller because it is all suddenly within our reach.