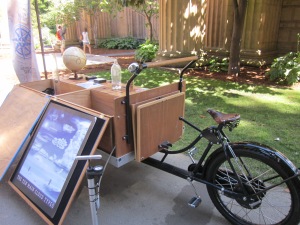 This behemoth fixie could be yours! (Yes, it’s really a fixie. I asked.)

When I started talking about commuting by bike with some of the parents at our son’s school, I realized that a lot of people found our plan for buying a cargo bike unfeasible. Our plan was: pay cash. In the case of our most recent bike, that was absolutely literal. I went to the ATM and got out some cash. (It was a cheap bike.) But most cargo bikes are expensive, far beyond even the daily withdrawal limit allowed by ATMs, which I personally have never even come near. And Matt and I are save-y people.

For normal American families who have two cars and are thinking about cargo and family biking, there is often a transition problem. Most people have a fair bit of debt already: cars, student loans, consumer debt, maybe a house (a long shot in San Francisco, more likely elsewhere). If you want to ditch a car and switch to the bike, what do you do in the interim period, while waiting for the money from selling a car when you don’t yet have a bike? If you’re not sure about getting a bike but want to try it out, how do you afford a relatively expensive bike while holding onto the option of driving? Sure, it’s possible to get something cheap on craigslist once you know enough—astonishingly, this has even happened to me—but most people don’t start at that point. I was talking to a lot of people who were interested in trying out this riding-a-bike-with-kids thing but didn’t feel able to throw a thousand dollars in cash, sometimes much more if they lived on a steep hill and needed electric assist, at the idea. And they certainly didn’t have the confidence to try finding a used bike. 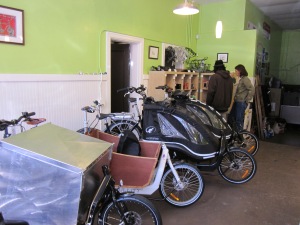 These bikes could also be yours: a selection from the awesome Splendid Cycles.

So when I heard that Portland credit unions offered bicycle loans (always Portland!), I thought that sounded very clever. It elevated bicycle purchases to the status of cars or motorcycles by treating them as installment loans, rather than “max out your credit card” loans. And it solved the transition problem of going from a car-using family to a bike-using family. Sure, it involved taking on more debt in the short term, but for families who really used the bike,  they’d start saving money soon enough–less gas, lower insurance rates, the freedom to drop a second car if relevant. And personally, although we believed we were committed, it took several months before we started defaulting to riding a bike with our kids rather than driving the car. And this is true even though getting our car out of our parking place is a nightmare. Finding a way to buy new riders time made sense to me. 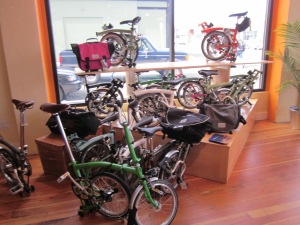 How about a Brompton? If you live in PORTLAND, there’s no shortage of choices at Clever Cycles.

So I asked our credit union if they offered bicycle loans. They said no, never even considered it, but tell us more. So I did. They said, huh, interesting, we’ll get back to you. And I assumed I would never hear anything more again. So it was unexpected to say the least when I got an email earlier this week from the CEO of our credit union saying that they had decided to offer bicycle loans starting June 1st, 2012. There is a $5,000 maximum and terms of up to three years (update: the rate is currently 7%). But how cool is that? San Francisco Fire Credit Union is open to all city residents. If you’re looking for a new bike and think a bike loan might make getting it easier, well, now there’s a way.