We started riding our bikes in large part to solve the riddle involved in getting our son to his elementary school. For the first year, we all went to kindergarten together. Our daughter was in child care downstairs at my office, so we’d drive to school, play on the yard until the bell rang, then I’d drop Matt off for the express bus and head to my office. Matt would take the express bus back, pick up our son at after-school, and I’d meet them with our daughter in the campus parking lot. This worked pretty well, although it was time-consuming, until we enrolled our daughter in preschool closer to home. At that point things got more complicated.

From the outside, just another urban public school

San Francisco is one of the cities in the United States that operates a public school lottery system. I know there are others (Cambridge, Los Angeles, Champaign, Berkeley, etc.) but this is the one we know best. There is no guaranteed neighborhood assignment. So at that time you toured a bunch of schools, listed up to seven that you liked, and hoped you got one. If you didn’t, you would be assigned to the closest school with openings. This can be intimidating but also offers huge opportunity. There are citywide schools that offer more than the general education curriculum, including foreign language education, K-8 schools, a Montessori school, etc. Most schools are pretty good and some are terrible, but because people hate the lottery system so violently, the perception is that only a few highly-desired schools are acceptable and the rest are hellholes.

For people who appreciate the charms of being underrated, this misperception offers an enormous opportunity to beat the system. We found it surprisingly easy to find schools we liked that none of the other preschool parents we knew had even heard of, let alone toured or listed on their applications. 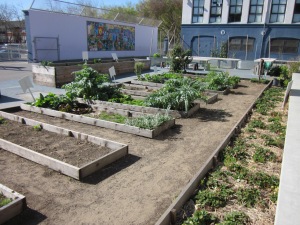 From the inside, a garden

There is a lot of herd mentality with a school lottery. There are about a dozen schools of the 100 or so in the city that get over half of the first choice requests from parents. They tend to have higher test scores. Parents we know like high test scores: they seem objective. But it only takes a little reading to realize that they are highly correlated with demographics. Schools that don’t have a lot of poor students have high test scores; schools that have more have lower scores. After reading some articles I realized that I could easily derive a formula: for every percentage point of students getting free and reduced price lunches, expect a 5 point drop in API (from a max of 1000). I made this up but it works pretty well in most circumstances (schools with a large share of Chinese-American kids tend to outperform their demographics, however).

San Francisco Unified School District enrolls about 60% free and reduced price lunch students. The school nearest us has ~10% free and reduced price lunch students. Its test scores are ~950, as expected. It is wildly popular and completely oversubscribed. On tours they indicate that parents are expected to contribute $1000 to the PTA annually, which I’m sure discourages certain families from even applying. On the flip side, we a toured Spanish immersion program in the Mission that had ~80% free and reduced price lunch students. Its test scores were, predictably, ~600. Poor students do poorly, because they tend to be English language learners, because they’re hungry, because they may be in transitional housing and lack heat and light, whatever. Wealthy students with educated parents do well no matter where they are (and the state has the demographic breakdowns to prove it at the Department of Education website). There are just more of them at certain schools.

My son learned to eat vegetables by growing them

I have a different perspective on all of this now, but at the time, like many parents facing the lottery, we pretty much lost our minds. Like everyone else at our preschool, we wanted the brass ring schools, the ones that had great scores. We knew it wasn’t that important, really, but a school with high test scores seemed like, if nothing else, a useful insurance policy. And it’s hard to buck the tide. Other parents said things like, “Well, 900 API is like an A, and you want an A school for your kids, right? You wouldn’t accept a B or a C school.” And thanks to relentless fundraising those schools had money to burn; their facilities were nicer, the selection of extra-curricular activities was better, and afterschool programs had won awards. It seemed easy enough to look past the occasional signs of near-rabid parental intensity to get the goodies.

Despite this, we did take the (in hindsight excellent) advice from Parents for Public Schools to tour every school within a reasonable commute distance, no matter what its test scores or perceived popularity. The internet is not your friend during the school search. With hindsight, it told us nothing useful, and often made us doubt ourselves for no good reason.

Our favorite tour by far in our busy pre-kindergarten tour season was Rosa Parks. It is not a school that had traditionally gotten any buzz in the San Francisco parent community. Middle-class families like ours tend to shun schools named after civil rights leaders, strongly preferring schools named after dead philanthropists or expensive tree-lined neighborhoods at nose-bleed elevations. I like to imagine SFUSD opening a new school named “The John D and Catherine T MacArthur Nob Hill Academy.” Even if it were in the Tenderloin, I’ll bet it would be hugely popular with parents.

What we liked about Rosa Parks on our tour: 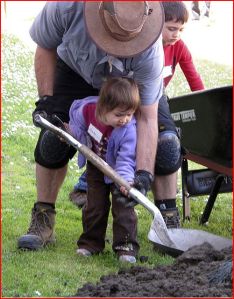 There were 12 people on our tour of Rosa Parks. The parent representatives said they were thrilled with this turnout. We had toured another school with well over 100 other people, in which the parent leading the tour complained how few of us showed up.  He wasn’t joking.

More than one person on our tour asked why there were so few of us and why, historically, no one had applied—the year prior to our enrollment Rosa Parks received fewer applicants than there were places available. The parents leading the tour sort of sighed and said that the combination of neighborhood and low test scores meant most people never even visited. We knew low test scores were explained by the high proportion of English language learners and SpEd students, so they didn’t bother us much. They had nothing to do with what our son would learn in a supportive environment. The neighborhood was admittedly a little grimmer than we’d hoped for, but I’d seen worse.

Now we have chickens. Yes, we are that trendy.

An unspoken reason for low enrollment (there were other schools in worse neighborhoods with worse test scores that were considered much more desirable) was the fact that the school was 40% African American and 20% Latino. Less than 10% of families were “white” as the district defined it, and many of those were Middle Eastern families where the women wore hijab and everyone spoke Arabic. When I mentioned touring this school to other white and Asian-American parents we knew who’d actually heard of it, there were, on occasion, curled lips, and comments I would be embarrassed to repeat. Last year I overheard one of my co-workers complaining to all and sundry that the district had assigned her to a horrific Title I school, Rosa Parks, and she wouldn’t be caught dead sending her son there. When I asked her what she didn’t like about it, she admitted, somewhat sheepishly, that she’d never visited. I told her we were very happy there.

Although it was not in our neighborhood (we live near the obscenely popular nosebleed schools, and knowing that our odds of getting into a school that people spoke about using exclamation points!!! were near-zero, we had expanded our range), Rosa Parks made our list. It was the school where we were placed in the first round assignment, not surprising given that only 44 families applied for the 40 available kindergarten spaces, and many of those were placed in schools they’d ranked higher. After a week of emotional flailing about not getting a school closer to home, we enrolled.

It would be a huge understatement to say that we have never regretted this decision.

We could not have asked for a better environment for our son, who was nervous about the transition to kindergarten. He joined a wonderful group of children and we adore them all. As long as he is with them, I have no fears about his voyage through the rest of the city’s school system. His teachers have been more caring and supportive than we had dreamed was possible. He is excelling academically despite being one of the youngest children in his class. Working in the school garden has led him to eat new vegetables, sometimes with gusto, a battle we had assumed was permanently lost. In his first year he went on over a dozen field trips (making me feel like I was rooked as a child). He tries to trick us by speaking in Japanese at home and strangers in Japantown compliment us on his accent. 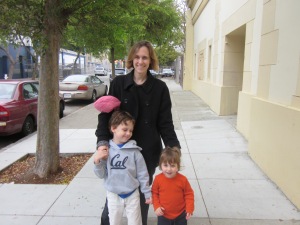 And I liked all of these people, some mildly because I barely knew them, some quite a lot because I knew them well. I liked how they were raising their kids, and I liked that I saw them in the classrooms when I volunteered, and I liked that his kindergarten teacher sometimes had more chaperones for field trips than she had expected. I found that I didn’t mind attending school events like PTA meetings and work days that I had always assumed I would dread. Two parents organized a drop-in Friday coffee klatch, which continues. When I think about school community now, I think about a crying kindergartner being successfully comforted by another classmate’s dad, or watching my daughter meet and play with her future classmates before she turned two.

Rosa Parks was not our first choice school, but it should have been. We hit the jackpot.

In our second year, the school became (marginally) more popular, and even though it was located in a not-terrific neighborhood, parking in the morning was getting more challenging. We couldn’t carpool in the morning anymore, and driving our son was making us crazy.

New bike racks filling up on a Saturday morning

When we returned from Copenhagen with what seemed to us like a novel idea to start bike commuting, we were surprised to realize that other parents at the school were already way ahead of us. Some were riding cargo bikes to school with their kids on the back, or tandems, or trailer-bikes, or jury-rigged bikes with their kids on the top tube. Our principal rides his bike to district offices to avoid having to park there. We had, astonishingly, never even noticed. These families had already asked the district to install bike racks.

Rosa Parks in 1942, but looking much the same 70 years later

Rosa Parks is a school in transition. It is still in a borderline neighborhood, its test scores have jumped but are still nothing anyone would brag about, and the community is still rough around the edges. But I yield to no one in the value I place on a good education for my children, and I am confident that we have chosen well. And we are in transition, too. Rosa Parks is the right place for us. We are, in many ways now, enjoying the ride.