Herewith, my experience identifying danger and good will while biking in the city 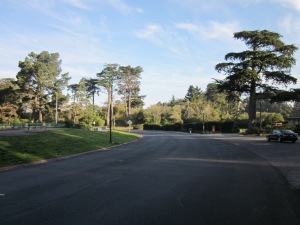 At the town hall we attended recently, there was mention of cyclists blowing through red lights, and I’ll admit that sometimes I feel like throwing certain people under the bus on this issue, figuratively speaking. This complaint is not made up of whole cloth; I have watched bikes blow through red lights on occasion, although my commute route, which is largely made up of separated bike lanes on quiet streets, does not really draw that kind of cyclist. It is not a route made for people with a lust for danger. (And the flip side, of course, is that making more streets bike-friendly makes people with a lust for danger wander off elsewhere, at high speeds, until eventually, I assume, they experiment with freeway riding and die before reproducing.) At the time the question came up, however, I thought that it was pretty easy to identify a cyclist who is going to blow through a red light or otherwise play by their own rules; some clues:

In the opposite corner, obeying traffic laws, you have:

But this made me think of the flip side: can I classify cars the same way? Yes indeed. Goodness knows I have witnessed no shortage of cars behaving badly, particularly during rush hour, the time of day I am most likely to have moments when I wish I was riding on a giant bus capable of mowing down anything else on the road. And say what you will about Muni drivers’ casual attitude toward punctuality, they have certainly not shrunk from attempting things like that in the past. Cars most likely to break the law in interesting ways, tailgate, run red lights and stop signs, and generally make my cycling experience less pleasant:

On the other hand, cars most likely to yield to cyclists/not tailgate/actually wait their turns at a four-way stop sign: 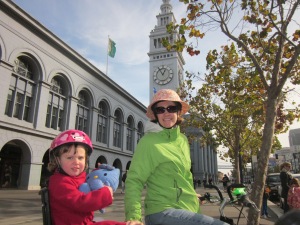 That said, in general I find that even when I’m outside my usual quiet and bike-laned streets, San Francisco drivers are very considerate and friendly, and I say this having missed some cross-traffic on occasion when I started cycling in the city, particularly at poorly-signed intersections at the top of hills (cars come up so fast, relatively speaking). I apologize to my fellow road users and endeavor daily to never do anything similar again. Happily for me, the hardest part of getting used to biking in San Francisco is getting used to the traffic and to a lesser extent, the wind. To my surprise, the hills are currently coming in at only third place. Dealing with drivers is usually not a big problem, at least for helmeted, child-seated, work-clothed me.  City traffic can be scary even with the protection of a 2-ton vehicle and overall most drivers seem to remember that when they see a bicycle.

I’ve lived in many cities now (Seattle in my childhood, Little Rock, Minneapolis, Chicago, Boston, Paris, Munich, the list is much longer but I lose track) and although we settled in San Francisco for professional reasons, part of the reason it’s been such a great place to live is that the city often feels like it’s making an effort to show that it likes us. It’s been true as we’ve wound through some difficult moments (finding housing, having a baby, the public school lottery, all of which ended better than we could have hoped) and it’s true again, as we’ve grown so much closer to it, riding our bikes.

2 responses to “Herewith, my experience identifying danger and good will while biking in the city”