Daddy made it home in time for cupcakes

Today was our daughter’s birthday. Now she is three.

What she wanted for her birthday (among other things, including: a big girl bed, playdates with her closest preschool friends, a trip to the ice cream store) was to ride on the Yuba Mundo to school with her brother for morning Rajio Taiso (since that video was shot, the middle yard has been replaced with an edible garden and the wall has been painted over with a mural, but the tradition continues in the lower yard).

Since we started riding and our daughter started preschool near our house, her chances to visit his school, which she loves, have dropped significantly. Each of our bikes currently carries one kid, and the prospect of riding all the way there just to turn around and go back home is not especially appealing anyway. So trips to school have pretty much been reserved for times when one of us is on the road and the other drives both kids to school, as the alternative of dropping her off at preschool before 7am is unappealing to say the least.

But for now, we have a bike that carries two kids (and then some) and it was her birthday, and she was already disappointed that Matt was out of town. So I packed up the bike the night before, and in the morning, loaded up both kids. Just getting to the street in the morning on such a long bike is an undertaking, particularly when Matt is away. By the time I got outside, I realized it was raining. Fortunately the kids were in multiple layers.

Getting our son to school is a non-trivial trip, although most of it is a pleasant ride along the Panhandle before morning rush hour. However there is no avoiding the hills between home and school, and at some point we have to soldier up and pick the best of a bad lot. Our best route is a steep climb up to Alamo Square, then back down. On a bike that weighs over 50 pounds. With two kids on the back. In the rain. Round trip. I figured I could push the bike if I had to.

It turns out that with that kind of load, forgetting the rain gear was zero problem for me as the rider. I was so overheated after I got to the top of Alamo Square that the rain was turning into steam about six inches from my body, like a low-rent halo.  But I managed to make it up to the top without stopping. Yeah! I’m a mule!

When I stopped at the light on the downhill, a couple pulled up in a car next to me, and rolled down a window. Both were laughing. “Did you know that your little one signals when you do?” asked the passenger. “Like this!” laughed the driver, sticking out his left arm. “It’s SO cute!” I had no idea, but I was delighted.

Although it was a grind of a ride, it was a lot of fun. Along the path in the Panhandle it’s easy to talk with the kids because there’s no traffic noise, and for some reason, the acoustics of the Yuba Mundo are pretty good; I can hear both kids and they can chat with each other. Their conversations often make no sense to me, but they seem to enjoy them. And commuting on a long bike with two kids on the back is apparently more than twice as entertaining to the world at large as commuting with only one. Other riders frequently commented (“WOW!”), drivers stopped in the street to stare and grin and wave. As our friends with the Bug Dummy note, everybody loves a parade. I never enjoyed our driving commute, so it’s nice to feel that we’re now improving someone else’s, although it feels like cheating to get congratulated for doing something we love. Our son’s entrée into the schoolyard felt like escorting a visiting monarch, as kids walking to the school yelled his name and pumped their fists in the air when they saw us ride by. “Cool bike!” they shouted.

Riding back up the hill to Alamo Square was harder. It’s steeper on the return side, and I was tired. About halfway up I stopped for a while and invited my daughter to enjoy the view. “Are you going slowly, mommy?” she asked. She is no dummy. 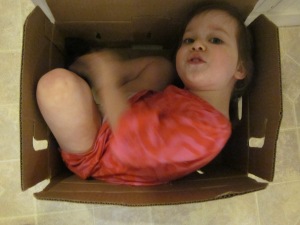 Every once in a while I’d see a dad (only dads for some reason) with a child seat on the back of the bike, or with a trailer-bike. I’ve realized that parent riders recognize each other instantly. They rang their bells in salute, we smiled and waved hello! Hello! My daughter was thrilled with the attention, which she seemed to take as worldwide recognition of her birthday. “I’m three!” she yelled. “I’m three!”

It was a hard ride, but I never could have imagined how much fun it turned out to be. There are so few of us with children in San Francisco; it’s not a family city. People give up on the schools without even visiting (our son’s lovely school is, astonishingly, under-enrolled). Parents flee the commute, not realizing they could ride as we do. We few, we happy few.