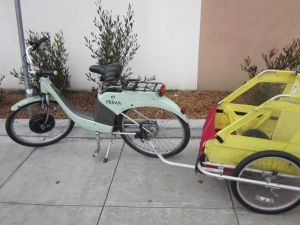 While I was getting lost on the way to Saturday’s class on getting kids on the road, I wandered through the park and library next door, and up to the middle school. There I saw an electric bike with a child trailer attached on the rear. Both of these are such rare sights that I immediately took a picture. Right after I did, the bike’s owner wandered out.

I asked him about his bike and he said he’d gotten it some time ago from a store in Oakland that was briefly importing electric bikes from Europe, and found them such poor sellers that it dumped them all at bargain basement prices. But he’d found the factory motor installed in it too weak, so he’d replaced it with a much more powerful motor, then upgraded the battery to boot. Worth it to buy even with the upgrades, he said, because the bike had a great compartment for the battery integrated into the frame. Then he said he’d just taken the bike up the hill with his two kids and their backpacks in the trailer, without even pedaling.

I was getting the sense that I was in the presence of someone who actually knew something about electric bikes, and this turned out to be the case. His name was Nick, he said, and he wrote columns for a new website, electricbike.com. Sure enough, he does. And then some. Well now.

It turned out he was a car mechanic but he loves bikes more. He thought car culture was crazy. “I tell people their car needs a $2800 repair, and they groan and tell me to do what I have to do. I tell them I can put an electric motor on their bike for $1000 and I’ll throw in the labor for free, and they tell me that it’s too expensive.” He was the first major fan I’ve ever met of electric bikes, and consistent with the tinkering evident in his own bicycle, he was not a fan of BionX, which as a closed system doesn’t allow swapping out parts. Talking to him was worth the embarrassment of showing up late for a class I was supposed to be helping to teach.

I mentioned meeting him to the other parents who were teaching the class. Like almost everyone with kids in the city, they were pretty excited about the prospect of electric assist, although none of us actually had one. Great for seniors riding in the city, said one. Another couple had an 8 year old and 5 year old, and they were commuting to school on a tandem with an Xtracycle FreeRadical on the back, which sounded like a totally awesome ride to me. But the dad, who teaches at Sunset, complained that the Xtracycled tandem was actually harder to get up hills than their old Xtracycled bike with both kids on the back.

What he really wanted for the school commute was a Metrofiets.  Who doesn’t? But they were put off by the cost, and I hear that: I find the cost of a Metrofiets daunting, and university professors typically make more than elementary school teachers (for reasons that elude me).  Nonetheless, unlike me, they were actually willing to make the trip down the Peninsula to Bay Area Cargo Bikes to test ride one, something I’ve avoided as I figure it could only lead me to want to buy another bicycle. 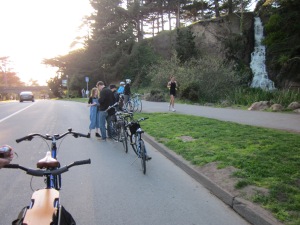 Families on bikes in the heart of the city

They’d been thinking about electric assist, and knew they’d need it if they actually got a box bike, but were having a hard time getting over the feeling that using a motor was somehow cheating. I knew exactly what they meant. It feels like I should be able to ride my bicycle without an electric assist, even though I know that my kids’ current weight is nearing the limit of my abilities. To me and to them, an electric assist felt less like a cool accessory and more like a necessary evil. It felt like compromising the bike for some reason. Heck, some riders feel that way about fenders, or for that matter, brakes. We had all seen the Xtracycle with the red handlebars and an electric assist riding in traffic every morning (there aren’t that many family bikes in this town; you start to get to know them). Not only did we all find that a little scary, it seemed kind of annoying that the guy on that bike doesn’t even bother to pedal. 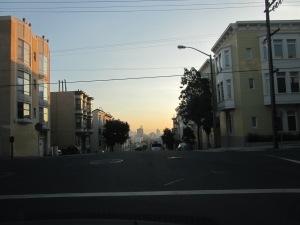 What’s more, thinking about the cost of an electric assist really irritated me for some reason. It took me a while to figure out why. Eventually I realized, and this is embarrassing: it was resentment. Parents in other, flatter cities can carry their kids without paying for electric assists, why couldn’t we? Isn’t it enough that we already have a much higher cost of living? When I tell people outside the Bay Area the average rent for a two-bedroom apartment in San Francisco ($3275 as of last month), they typically gasp in disbelief, and say, “I could buy a mansion for that where we live!” Yes, I knew that already, thanks for sharing. We live surrounded by fog 11 months of the year and pay $4.50/gallon for gas (albeit rarely). San Francisco is one of the few places in the country where I know couples who are both well-paid lawyers and who are nonetheless raising their kids underneath the stairs, Harry Potter-style, of a 1-bedroom apartment, because that’s what they can afford. We all make compromises to live here. On top of all that, I have to drop a grand on electric assist when everyone else in the world can haul kids on their bikes fueled only by righteousness and an extra serving of oatmeal in the morning?

This is embarrassing to admit because we are happy to be here. Lots of people say they would be thrilled to trade places with us (although when push comes to shove they usually balk at the prospect of raising their kids in a garret under the stairs). So we’re going to pay more to ride our bikes than we would elsewhere. Why should this be any different from anything else that costs more in the city? 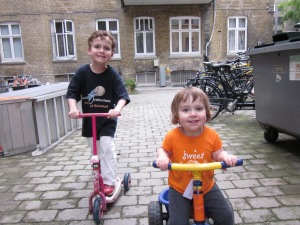 Anyway, I got none of this angst from the electric bike mechanic, or from his website. It was all about the thrill of having a motor. He pointed out that the cost of using an electric assist was bupkis: “You spend more on power if you forget to turn the light in the closet off in the morning.” I now realize that part of the issue with electric bikes is trying to reconcile bicycle culture, which views motors with suspicion because they’re related to cars, which have a bad habit of mowing people down, and mechanic culture, which views bicycles as a neat way to use motors without having to register a vehicle, get a license, or avoid mountain bike trails. But if it’s going to happen anywhere, it will happen here, in the City by the Bay, Gam Saan, with its countless hills.