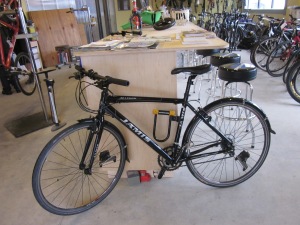 On Saturday I went out with my sister while my in-laws took our kids out for crafts and Matt went to a business event at Berkeley. Thunderstorms were in the forecast and Matt was heading for the bridge anyway, so he dropped me off on the way. But with no rain coming down at that moment, we decided to ride. What the hey, if the weather changes, that’s why we have rain gear.

I love to take the bike South of Market where she lives; it is flat as far as the eye can see. I’m not the only one; when we arrived at the restaurant for breakfast at 9:00am, not exactly the brunch rush hour in her hipster-rich hood, we had to take the second bike rack because the first one was already full.

We had hoped to stay out longer but the wind eventually became unbearable. “I hate the wind even more than I hate the hills,” my sister said. We are alike in many ways.

On the way back while we were stopped at a light, a pedestrian stopped in the crosswalk. “Wait a minute!”he yelled. “You’re on bikes! And you’re stopped at a red light? Thank you!” Sigh.

So we went back to her condo and she showed me some excruciatingly painful ways to get rid of muscle knots by applying pressure with a lacrosse ball while her dog jumped on me. Very effective (the dog is optional) but I’m not sure I’m enough of a masochist to ever do it again. Because my sister is more hard core than I will ever be, she has long since moved on to using a length of metal pipe.

This is an electric bike?

I managed to endanger the community while we were still out, however. Now that I try to stop and take pictures of the interesting things I see, I have become a hazard to everything on wheels. When I slowed to check out an odd-looking bike in the window of a computer store, I knocked my sister into the groove of a Muni track, at which point she understandably fell down. Since we were stopped at that point anyway, we decided to get a closer look. It was a single-speed with an extremely unobtrusive electric assist from Clean Republic. The motor on the front wheel looked more like a hub dynamo for lights. But the bike had no lights and a cord trailing off of a small bag under the seatpost labeled “Clean Republic.”  The store was closed, alas, and the owner was nowhere in sight, so all I know about that electric assist system is: it’s subtle.

Having learned from this experience, I did not attempt to take pictures of:

One of these things does not quite belong

I did, however, get a lot of pictures inside the world’s most democratic bike store. Even I have heard of Seven Cycles. This shop had one hanging out (slumming?) with a Cannondale and a Giant. I thought we were visiting because my sister needed something, but it turned out we were there because she wanted me to write about the place. Sure, why not?