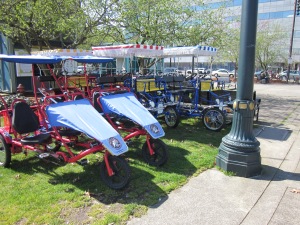 I draw the line at renting a surrey again, however. (Oh Portland, how could you?)

Have you signed up for 30 days of biking? All the cool kids are doing it.

I was on the fence about 30 days of biking, which predictably involves committing to ride a bike every day of April, because I knew I was going out of town for a conference for part of the month. I am compulsive about, uh, everything. Signing up for 30 days of biking knowing that I’d only be doing 27 days sounded like cheating to me.

But I ended up riding a bike every day that I was in Portland. There was a bike stop within walking distance that offered rentals, and the hotel was happy to store my rental in their bell room when I wasn’t riding it. No problem! If I could fly to Portland and ride a bike (or two) every day, surely I could manage to get to Sacramento and ride a bike every day. It was close enough that I shouldn’t even need a rental bike.

One of my co-workers is going to Sacramento as well, and she doesn’t own a car (she rides a Bianchi Milano, upgraded with an internally geared hub; a lovely bike). She said she took Amtrak there every year. Of course! You can take a bike on Amtrak. Unfortunately the train doesn’t stop in San Francisco; instead, Amtrak sends a bus over to the city to take passengers to Emeryville. This sounded more complicated than I’d hoped, but evidently it is possible.

So I signed up for 30 days of biking. And although I had not intended any such thing, it appears I may be turning into a bicycle tourist of sorts after all. I still draw the line at Atlanta, though.