Catching the Amtrak shuttle bus to the train to Sacramento

Last month I went to Sacramento for a conference. Because it was right in the middle of 30 days of biking, I took my bike. This was more complicated than it should have been.

At the suggestion of a car-free colleague, I decided to take Amtrak, because Amtrak takes bikes, and it would be cheaper than renting a car that could take the bike and parking it (not that this necessarily mattered immensely, as this was business travel). The downside of this plan is that Amtrak does not actually go to San Francisco. Instead, you have to get to one of their pickup points, catch a free shuttle bus, then get driven across the bay to Emeryville. This takes an hour or so, which is, unfortunately, the same amount of time it takes to drive to Sacramento from San Francisco. Then it’s another 90 minutes on the train from Emeryville to Sacramento, assuming that the train arrives on time, which I am sorry to say it did not.

The whole experience was daunting. If I had known what I was getting into, I would have rented a car after all. Amtrak is a great option if you live in the East Bay, but in San Francisco, not so much.

When I mentioned to one of my coworkers I was planning to continue 30 days of biking in Sacramento, she asked, “Oh, so will you be riding one of the stationary bikes at the hotel gym?”

And I said, “Well, that would be the SMART thing to do, but instead I decided to take my bike on Amtrak.” [Head-smack!]

When you add in the hour-plus it took me to get across town on a university shuttle, with bike, just to get to the Amtrak shuttle bus stop, I was feeling like an idiot before I even left San Francisco. But I didn’t want to wallow. So I did the shuttle bus to train transfer and a few hours later, rode from the Amtrak station in Sacramento to the conference hotel. Sacramento is a fun place to ride, as it is resolutely level, and at 10pm, I was the only person on the (wide, smooth) roads.

I had hopes that I might be able to sneak out to the famed American River trail, which is evidently an incredible place to ride, or maybe even arrange to meet Tiny Helmets, but a look at the conference schedule made me realize I was doomed. Breakfast started at 7am each day, and every following minute was scripted until 8pm, at which point we were released to dinner. This conference was held by one of my funders, and it was clear in the first 30 minutes that they were paying attention to attendance. Alas, this wasn’t Portland.

I was so fried after the first day that heading to the hotel restaurant was the extent of my ambition. I ended up eating with the toxicologists, and they are a fun crew. They all worked in air pollution and talked about various exposure chambers they built, projects that involved sheet metal and blowtorches. Listening to their dinner conversation was like eavesdropping on Iron Man. Two of the moms swapped stories of how, when their children got lice, they broke out the microscopes (toxicologists evidently have home microscopes) so they could show their kids the nits that they had combed out. Even by the standards of the science crew I run with on a daily basis, this is extremely hard core. 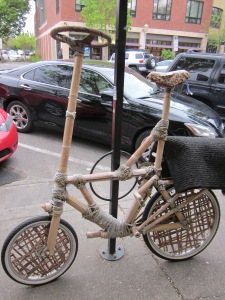 Davis commuter: a bamboo-wrapped tall bike with an animal print seat and a pet carrier on the rear rack.

I got a couple of bike rides in by skipping 15 minutes of the poster sessions to take a quick turn around the convention center. I assumed from looking at local riders, and there were a fair number around, that taking a bike on the sidewalk was okay, but who knows for sure. I was unable to skip out for a ride when I gave my own poster on the last day. I had planned to make it up by riding my bike back to the Amtrak station, but when one of my toxicologist friends offered to drive me back to San Francisco, I figured it would be easier and faster to throw the bike in her car and ride somewhere when I got back.

It turned out that hitching a ride was absolutely worth it, because she wanted to know more about how I was bike commuting with our kids, and because we stopped in Davis for dinner. Davis is an amazing place for bikes, nearly Portland-esque, but even flatter, which of course means more wildly impractical and entertaining bikes. And I found a new biking-mom friend. Unfortunately she lives on the other side of the city. 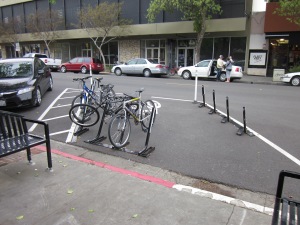 Davis has bike corrals all over downtown. Get in the game, San Francisco.

This kind of business trip wasn’t the best case scenario for trying to travel with a bike, to say the least, but I was pleasantly surprised at how easy it was to keep a bike handy. The Sacramento hotel staff, just like the Portland hotel staff, was happy to store my bike in the bell room. Having the bike made getting to the hotel from the train station a breeze, and it was nice to stretch my legs after all the time on buses and trains. Getting to Sacramento and back was the tricky part. Transportation between cities isn’t really set up for people who want to ride a bike once they get somewhere. Amtrak makes it possible but inconvenient, and they won’t take cargo bikes. Driving a car is an option for some trips, but once you’re in a car, it’s extra work to drag a bike around. And it seems to sort of miss the point. Flying is nightmarish even without a bike in tow.

The problem of traveling with bikes is admittedly a specialized one, a real first-world problem. It was nice to read that A Simple Six is also thinking about this, as it suggests that if I am crazy, which seems entirely plausible, that at least I’ll have some company when I’m institutionalized.