Panniers and the Bobike Maxi (and Bobike Junior)

Bikes can be rigged to carry lots of cargo, but kids+cargo is harder

It can be difficult to tote around both a kid and the gear that goes with a kid on an ordinary bike. When the kids are older than 9 months or so and younger than three years, a front seat like the Bobike Mini, Yepp Mini, or iBert can resolve this problem. The kid goes in front and you can put standard panniers in the back. Personally, of those three seats, I’d get the Bobike or the Yepp because either can be fitted with windscreens.

Then once your kid reaches 30 pounds or 3 years, there are some decisions to be made. Most American rear seats (Topeak, etc., which I think of as “the finger-slicer” since the recall) for kids attach to the rear rack of a bicycle. This limits the weight that you can put on the seat to the weight you can put on the rack, and this sometimes tops off at 40 pounds. Furthermore, you can’t use the rack for anything else. You can add a front basket to substitute, but in most cases front baskets don’t hold much, and when they’re loaded up, they tend to make the bike tip. In combination with the laughable kickstands available on most bikes in the US, there is a nagging worry that the bike will fall over with you and/or the kid on board. In my limited experience with a rack-mounted rear seat, this is justified.

Nonetheless I was pleased to see that there is a partial solution for carrying cargo on rack-mounted rear seats, the Topeak Ma-Ma-San bag, which attaches to the back of a Topeak seat. I saw one when we were visiting San Diego. It doesn’t hold a lot, but at least you won’t be stuck on a ride without a supply of diapers. 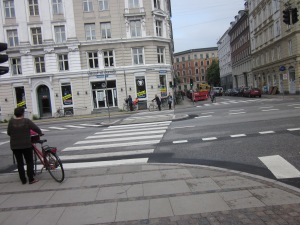 But we started riding with our kids in Copenhagen, so our first choice was not an American rack-mounted seat but a European frame-mounted seat. Both the Bobike Maxi and the Yepp Maxi (as well as our Bobike Junior) attach to the frame of the bike. The Bobike has a tongue-in-groove attachment on the seat tube, and two braces for the footrests on the seat stays. So these seats are balanced on a tripod, and each of the legs of the tripod is fixed to the frame of the bike. The attachment points remain on the bike more or less permanently, but the seats can pop on and off as needed; very handy. What’s more, this attachment system means that the rear rack is completely independent of the child seat. You can still put stuff on the rack. Specifically, you can put panniers on the rack.

The bars holding the footrests block half the rack

The problem we faced is that the footrests sweep diagonally down and block about half of the length of the rear rack. Most panniers are designed to take up the whole rack. I know this because I ordered a lot of panniers on Amazon during the time when I was looking for a way to carry cargo and a kid at the same time. This was the period when I discovered the miraculous bungee net and also when I seriously tested the patience of our office receptionist and of Amazon’s return policy. I have an Amazon Prime membership through work, so for a while I was getting a different bike bag every week, each of which I took downstairs to bike parking, discovered would not work with the child seat installed, and immediately boxed back up for return. I was most disappointed that the Detours panniers recommended for the Breezer by She Rides a Bike didn’t work, as they looked lovely. But the clips were over nine inches apart, and took up the entire length of the rack. I needed bike bags with narrow clips and a narrow profile, but none of the listings for panniers ever noted the distance between the pannier hooks.

A close-up of the Bobike Maxi mount

Family Ride solved this problem a different way, by getting an extra-long rear rack and installing folding metal baskets underneath her Bobike Maxi. I considered this but it wasn’t ideal for me because the dynamo lights on my Breezer are wired directly to the existing rack, so changing the rack was a much bigger job. I also didn’t like the rattling of the metal baskets on a friend’s bike (without a child seat) that I’d tried.

Basil pannier hooks are less than a handspan apart

My pannier breakthrough came while I was visiting one of the many bike shops in San Francisco that is hostile to children on the advice of a childless friend. This was an understandable mistake on her part, as they advertise themselves as child-friendly. However this is a lie. As one example, the employees were appalled that we wanted to use a living, breathing child—our daughter—to test out the Yepp Maxi child seat they had on display. Their concern did not revolve around safety, because the seat was sitting on the ground. Their primary issue instead seemed to be that putting gleeful children in child seats messed with the store’s SoMa aesthetic, which was all high ceilings, reclaimed wood plank flooring, bikes in lollipop colors, smooth jazz, Yakkay helmets and leather wine carriers that strapped onto top tubes. Nonetheless, while I was there, I saw some Basil panniers, and picking one up, I realized that it had very closely spaced hooks. Was it really that simple? Yes it was. Dutch panniers are sized to fit around Dutch child seats.

I did not buy a pannier from this bike shop because they were, not to put too fine a point on it, jerks. And our local shop, Everybody Bikes, does not carry Basil bags. So in gratitude for Amazon’s extremely generous return policy, which I had used to the hilt over the last months to order over a dozen bags and keep nothing but a bungee net, I ordered the narrowest Basil pannier I could find there, the Basil Lady Sport. There is a black version that is not particularly ladylike–Matt once asked if he could borrow it for work–and a purple-flowered version that is more so. Both fit under either the Bobike Junior or the Bobike Maxi, although they need to be squeezed a bit to go under the footrests. (And like virtually all Amazon products, if you leave them in your cart long enough without actually purchasing them, they’ll go on sale.) 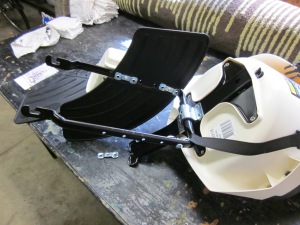 The side protectors on the Bobike Maxi have to be removed to make this work. I checked with the shop that installed our seat and learned that these shields are not necessary for safety—if you have a pannier on the back, your kid’s feet won’t go into the spokes anyway. The Bobike Junior doesn’t have side guards at all. I have heard that the Yepp Maxi foot rest guards are not removable, so no promises about whether panniers would work with a Yepp seat. Go Bobike or go without panniers, I guess.

A side view of a pannier clipped under the Bobike Maxi

My panniers are bigger than they look. I have two, and each can hold about 1.5 paper grocery bags. I have put a box of wine on one side and yogurt and milk in the other, plus various fruits and vegetables, and altogether this can add up to quite a bit of weight. This slows me down going uphill, but it gets the shopping done. They look professional enough in solid black that I can take them to university meetings and they do not look out of place among the other non-bicycle bags, particularly given that there is a zippered cover over the hooks. They come with an integrated rain cover, which is very helpful. The rain cover pops out of a zippered pocket on the bottom of the bags. You can expect to lose the pull-tab on that zipper to the spokes within a couple of weeks. It still works, though.

Panniers under a child seat turn an ordinary bike into a cargo bike. My Breezer carries not only my kids but a week’s worth of groceries on the same ride. Finding my panniers was worth all that effort.

19 responses to “Panniers and the Bobike Maxi (and Bobike Junior)”