Breezer Uptown 8 and Bobike Maxi and Roland add+bike: Three countries on one bike (four if you count the Japanese front rack)

There’s a new bicycle accessory in the house. In response to my son’s requests for an opportunity to pedal, we got a trailer-bike. Technically he’s old enough to ride by himself, but given the traffic and hills around San Francisco, none of us felt ready for that.

Although we saw the promise of trailer-bikes early-on, we had difficulty finding one we liked. The ones that mounted to the stem of the adult’s bike (Adams Trail-a-Bike, Weehoo) were unstable in both our personal experience and in other parents’ more harrowing experiences. And we couldn’t mount a rear child seat over one (ditto for the Trail-Gator). The Burley Piccolo mounts solidly to a custom rack, but the knob-mount is huge and meant that again we couldn’t mount a child seat over one—or for that matter, use the top of the rack. The FollowMe tandem looked more promising, but reviewers noted it was extremely heavy even without the bike attached, making it tough to go up hills—not that it mattered, as word from the only US distributor of the FollowMe tandem, Clever Cycles (Portland), was that they were out of stock and would be for the foreseeable future.

I don’t remember where I heard about the Roland add+bike, but when I did I noticed two things right away: first, it mounted to the rack, like the Piccolo, which made it more stable. Second, the mounting point was nearly flat and sat at the end of the rack, making it possible to mount a child seat for our daughter over it and to use the entire rack, like the FollowMe. It cost a little less, in US dollars, than a Piccolo. The downside, and this was a big downside, was that it was only sold in Germany.

But fortune smiled. Ever since high school I have had a good friend in Munich, Oli. We were, by coincidence, exchange students in each others’ high schools. One month after I learned about the Roland, Oli wrote to say he was visiting San Francisco to complete an audit, and would we like to meet while he was in town? I asked him if wanted to stay with us and if he’d heard of the Roland. He had. He said he’d love to stay with us, as his company was blanching at the cost of hotel rooms in San Francisco, and in return he’d be delighted to bring us a Roland add+bike from Munich as one of his checked bags. Win-win! 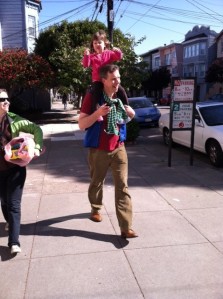 Our kids were thrilled to have someone so tall to carry them around.

Oli, as it happens, loves bikes as much as we do. He and his wife imported their own Bakfiets from the Netherlands to Munich for commuting with their three daughters. “We call it… the FERRARI!” Within a week, he’d found us a used Roland add+bike and its custom rack on German eBay for the unbelievable price of 77 Euros. It was a single speed model. (The Roland also comes in 3-speed and 7-speed models, both of which have internally geared hubs! On a trailer-bike!) But for that kind of savings we could live without gears. Oli said that used Rolands are cheap in Germany now because the fenders and chain guards are made of plastic, and everyone is concerned about potential BPA exposure. I was so thrilled that the trailer-bike came with fenders and a chain guard—totally non-standard in the US—that I was willing to tell our kids not to lick the parts. Also: unbeatable value! 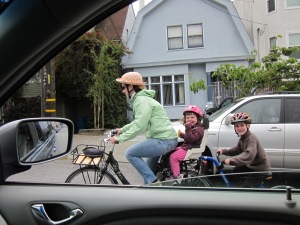 Up, up, and away! Matt needed the car to catch up to us on this hill.

The Roland rack is the custom rear rack we fitted on the Breezer when upgrading a half-dozen other things. Our bike shop complained that this was, ultimately, not a particularly easy job. But it totally worked. When we picked up the Breezer, we brought the Roland with us and built a giant articulated bike right there on the sidewalk: Breezer+Bobike Maxi+Roland. After the bike shop adjusted the handlebars to our son’s height, we took it for a spin. It was quite a sight. Everyone ran out of the shop to watch.

This rod drops into a metal through-hole in the rear rack. The divot in the rod is for a smaller, sprung rod that is mounted horizontally below the rack itself, and which prevents the attachment rod from bouncing out on bumps.

The Roland is by far the nicest trailer-bike I have ever seen, and it boggles my mind that no one is importing it. The custom rack is very heavy-duty, and at the rear there is a metal through-hole welded to the rack itself. A rod points down from the latch-point of the trailer bike, and slips into the through-hole. It locks into place where a second rod springs into a divot on the side of the attachment rod to secure it. Although the weight of the trailer-bike alone would probably hold everything in position, the extra attachment-point makes it even more secure. (This is all very hard to explain in words; check out the pictures for details.) Once in place the trailer-bike can rotate through turns because the rod turns inside the through-hole. 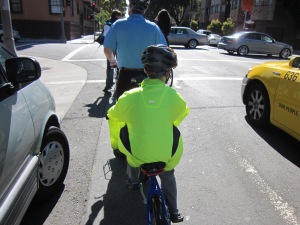 Matt tried out riding the Breezer with the Roland add+bike–this is the end of the Wiggle (the unpleasant part).

As mentioned, the Roland is pretty plush by American standards. A chain guard and fender are standard. There are lots of accessories available, including a kid-sized rear rack for panniers, not to mention a cargo kickstand for the trailer-bike itself, as well as extra metal mounts—as this part is small and cheap to ship overseas, we are already thinking of ordering one and drilling a hole into the Kona MinUte’s deck for it. Why not? Our son loves this trailer-bike. He is thrilled to be pedaling without the stress of dealing with traffic, and with, let’s face it, with an adult power assist to get him up the hills.

Like any trailer-bike, the Roland adds extra weight, and this is not necessarily insignificant. Being able to carry two kids and two panniers plus whatever I can stuff in the new front basket means the Breezer can now really haul, and this is fantastically practical. However with the Bobike Maxi and my daughter on the back, in addition to my son on the Roland, getting up real hills is hard work even with a stoker, although it’s no problem where it’s flat. Even with the extra work, this is a welcome additional option for carrying two kids on one bike, especially if they’re squabbling, which can be a problem when they’re sharing the deck on the Kona MinUte. (That can be a problem on any longtail bike; it isn’t a MinUte-specific concern.)

So overall: we adore the Roland. I would suggest that anyone who is interested in a trailer-bike and who has access to a willing German get one. Apparently they’re cheap right now on German eBay. But I realize this isn’t the most helpful suggestion. It’s like suggesting that someone take their preschooler to school on an authentic Japanese mamachari. It is wildly unlikely that anyone who doesn’t have my recent phenomenal bicycle luck could find either one. At the same time, given the reaction I’ve gotten to both, it astonishes me that there are not already dozens of entrepreneurs rushing to import them.

Last but not least, the Roland has done something I didn’t think was possible. It has made my Breezer look cool. I have accepted that the Breezer is the least visibly impressive of all our bicycles; it has been compared to a vacuum cleaner, and this was not intended as a compliment. Yet I appreciate its practicality, and I ride it more than any of our other bicycles. For the first time ever, though, when I was riding the Breezer loaded up with a rear child seat and a trailer-bike in my own personal parade, people shouted “Cool bike!” as we rode by. And it was very sweet to have our most underrated bike finally get the appreciation it deserved.