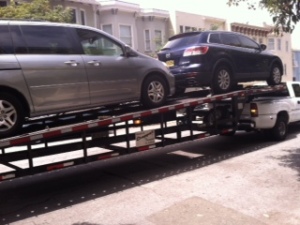 The minivan goes to SoCal. Trucks on trucks! If only the kids had seen this.

Hey! Hi there! What’s new? There are some big changes here at the Hum household. Not only did I almost break a bike (although it’s back and usable now, I can hear it creaking if I go uphill loaded, so I don’t do that anymore—but give me time, maybe I can still manage to snap the frame in two!), we gave up our minivan last week.

Now we are a car-free family.

Yeah, I wasn’t expecting that either.

We had been talking about getting rid of the minivan for quite a while and replacing it with something more economy-sized that would be better for city driving. We bought the minivan new, in early 2006, and knew it was still worth a reasonable amount. In May we contacted our credit union, which has an auto-purchasing service (thank goodness, because we are lazy), and asked whether it would be possible to sell the minivan and use the proceeds to buy a smaller car. From the used car values we saw online, it seemed as though this could be a zero-cost transaction.

They said they would have no trouble selling the minivan, which was still worth a fair bit, even more than I’d expected—they shopped it around the state, found several dealers who wanted it, and had them bid for it. But their efforts to find us a used small car with good mileage were less successful. Everyone wanted cars like that, and the used market was almost nonexistent. The cars that they found had been driven to death and/or were priced nearly the same as new ones. They suggested that if we wanted to get a car in decent condition with good gas mileage, we’d be better off buying new, although they’d keep looking.

Oh, the places we go: The F Castro line streetcars, imported from Italy

I had no interest in buying a new car. We have learned in the past few years what happens to cars in San Francisco. The city is cruel to vehicles of all kinds. Multiple pieces of our minivan had been replaced when they were hit while it was parked. So we sat around and waited for updates.

Three weeks ago, we took the minivan in for an oil change. The shop noted that it was time for the 60,000 mile tune-up, which they estimated would cost $1,500 or so. We also received our insurance bill for the next six months, which was $600 (auto insurance in San Francisco is expensive). We were looking at spending over $2,000 to maintain a car that we drove maybe once a week, couldn’t park in our tiny space without flipping in the side mirrors just to get through the garage door, and didn’t even LIKE.

Oh, the places we go: The Children’s Playground at Sharon Meadow

At that point we began wondering it whether would make more sense to just sell it and use City CarShare and Muni until we found something we wanted to buy. The bus stop is 100 feet from our front door, the street car line is two blocks away, and there are three City CarShare pods within three blocks. We have bikes that we ride with our kids all the time. How bad could it be? We called the credit union and they said: sounds reasonable to us.

So two weeks ago we sent in the paperwork with the final mileage to sell the car. Last Friday, a dealer transporter showed up and drove it away on a truck. During these last two weeks, we began to wonder if we really wanted another car after all.

The first week was very hard, partly, I suspect, because the car was still sitting in the garage but we couldn’t drive it anywhere, having submitted the final mileage, the title and the registration. The kids knew it was going away and were confused that they couldn’t take a last ride. But that was the same week that I calculated what it was costing us to own a car that spent most of the time sitting in the garage, and it was sobering. 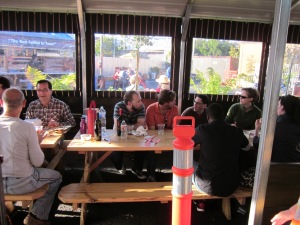 Oh, the places we go: my brother-in-law’s birthday dinner at StrEAT Food, south of Market

We bought the minivan for cash and so we never had interest payments, and by university policy, parking for one car is bundled into our rent. And yet an older, paid-off car that we drove only occasionally was costing us $400-$600 each month. That kind of money would pay for a lot of rental cars and taxi rides, more than I could imagine needing. And that was without even considering that we would walk away with a big windfall if we didn’t get another car.

After some discussion, we thought: well, it’s worth a shot. Even if we decide to get another car eventually, every month that we can put that off saves us ~$500, less whatever we spend on public transit, rental cars, and taxi rides. At a minimum, waiting a few months would fund a very nice family vacation.

And so here we are. With every day that passes the thought of getting another car seems less interesting. Despite some terrible bike karma in the last two weeks (broken bike, flat tires, you name it) everything is basically fine. We were planning to get another family bike anyway. We have found all kinds of cool new travel alternatives: car sharing, ride sharing, public and semi-public transit. All of them seem pretty appealing compared to buying a car that will sit unused in a garage most of the time. And even if we use them quite a lot (we haven’t), they are much, much cheaper than owning the car. 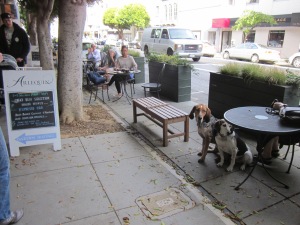 There aren’t a lot of families who choose to go without a car if they can afford one, even in San Francisco. Most people insist it is impossible: Muni is unreliable at best, the hills are too intense for biking, taxi service is horrible, and car sharing services are too inconvenient or expensive. You hear the same stories, with different verses, when people talk about living without a car in suburban or rural areas: public transit is dreadful or nonexistent, riding bikes is too dangerous, everything is too far away, taxi service and car sharing are too expensive or too hard to find. Nearly everyone says families in America can’t survive without cars. Can they?

Oh, the places we go: “Look!” yells my daughter. “It’s my emergency room!”

A year ago, we were preparing for a trip to Copenhagen, a city we had no idea was full of bike commuters. If you had asked whether we could live without a car I would have said it was not possible. Not possible. How would we get our kids to school? How would we shop? It was hard enough with one car. What a difference a year makes.

How long will we last? Let’s find out.

14 responses to “One less minivan”