We tried it: Specialized Hardrock and a Burley Bee trailer 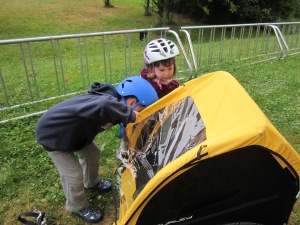 In our effort to try every cargo bike configuration we could get our hands on, we started out traditionally. While in Bellingham, we rented a mountain bike with a child trailer. My kids have ridden on many different cargo bikes now, plus a couple of bikes rigged as child haulers after the fact (Brompton with IT Chair, city bikes with child seats) but this was their first trip in an actual trailer, and my first time hauling them.

The Specialized Hardrock is a mountain bike. For the purpose of hauling a trailer around town, it was not everything I could have wished for: it had no kick stand, no chain guard, no fenders, no lights, and no bell. The brakes evoked a howling chorus of demons with their shrieking and the saddle was indistinguishable from an anvil. 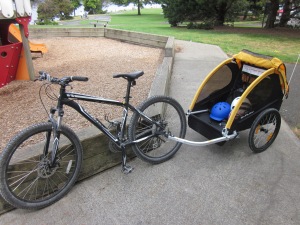 However, renters can’t be choosers and after riding the many gravel-strewn bike paths of Bellingham (which are BEAUTIFUL! Seriously, there is no reason to ever get in a car in Bellingham, it was amazing!) I came to appreciate the knobby tires and front suspension. The bike was very light, which made it an excellent climber, as well as easy to pick up when I had to drop it on the ground to stop riding because there was no tree or post to lean against. Also the pedals were okay, and the shifting was smooth.

While I have little basis for comparison, the Burley Bee, by comparison, seemed much better designed for our use. It helped that the shop had just replaced its rental trailer. Our ride was this particular Bee’s maiden voyage, and it was, as a result, spotless. Evidently the Bee is the entry-level Burley double trailer, but it seemed to have everything that we would want in a trailer, if we wanted a trailer, and I actually sort of do want one now. 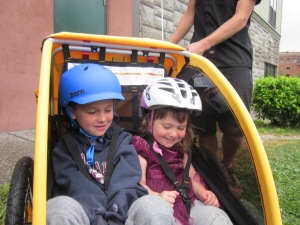 Seemed cramped to me, but the kids had no problem with it.

My kids were fascinated by the Bee from the moment they saw it. Luckily my kids get along well so the fact that they were crammed in there pretty tightly was not a problem from their perspective until they’d been riding for almost three hours. During that time we took a few bakery, playground and farmers market breaks, plus multiple stops to put the cover on, take the cover off, put the cover on, take the cover off (they were yanking my chain). Anyway, by the end of the ride they were hitting each other and crying, but they lasted longer than I’d expected.

The pros of this setp:

The cons of this setup:

So there are some downsides, particularly for our situation, which is admittedly atypical (we have no car, we live on the side of a mountain in a large city that has no neighborhood schools or school buses and thus we face a long commute with kids, etc.) And yet the trailer has some appeal. Mostly I see its value for traveling. 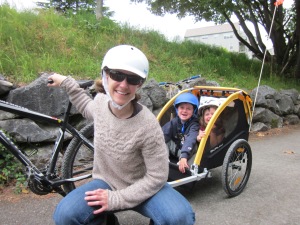 There are some downsides, but this setup is probably a lot cheaper and more versatile than a triple tandem with S&S couplers.

It is extremely hard to travel with a cargo bike. They aren’t allowed on trains, they often don’t fit on cars, and planes are out of the question. Trailers can usually be collapsed into a travel-friendly package. Most of the places we travel, like my mom’s, are places my kids could ride by themselves, except that it’s virtually impossible to rent kids’ bikes. Believe me, we have asked. With the Brompton and a trailer we could travel and not have to worry as much about renting a car or getting rides.

I can also see the value of a trailer for days that my kids would otherwise object to riding somewhere, particularly cold and rainy days. I would want to think hard about the routes we might take with a trailer, given the pounding it gave my rental bike going downhill, but with a heavier bike it could work very well for foul weather. And having the extra cargo capacity could be extremely useful. 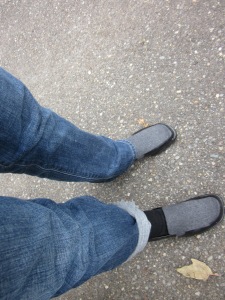 Hey mountain bike, I haven’t forgotten that you made me look even more like a dork than usual.

So at this point I am seriously considering keeping an eye out for a used trailer. I can’t imagine it would be worth buying one new for the kinds of uses we’re considering. However if we could find one for the price of a week’s rental in Bellingham, I suspect it would be worth having around.

10 responses to “We tried it: Specialized Hardrock and a Burley Bee trailer”