We tried it: Madsen

My kids didn’t want to ride a bike until they saw it and said, “Oh, okay, it’s a cool bike.”

The Madsen is unlike any other bike on the market I’ve ever seen. It is like a reverse box bike, with the box in the back instead of the front. A longbox rather than a longtail? The Madsen has been reviewed before, by more experienced riders than we are, and on a newer model to boot. But we got to try riding a (first generation) Madsen for a day or so thanks to the generosity of The Main Tank, who loaned hers to us during our stay in Seattle, so I thought I’d write about it anyway. And here’s a 2014 review of an assisted Madsen from a family of six!

Before we went on our trip, I sent a list of every cargo bike I could find to my brother-in-law, who then looked up all their specifications and told us which he thought we should seriously consider. He was fascinated by the box in back design of the Madsen. He was less impressed by the quality of the components. This is the way it is: less expensive cargo bikes have lower-quality parts. Whether that matters depends somewhat on the conditions in which you ride. San Francisco is hard on bikes, and so this is something that’s come to matter a lot to us. Like a lot of people where we live, we have spent a fair bit of money upgrading our original cargo bike, the Kona MinUte. Most of that went into replacing the brakes. We are tireless and tiresome evangelists on the subject of hydraulic disc brakes. If we got a Madsen it’s likely we’d end up spending a fair bit of money upgrading parts on it as well.

The Madsen is a fun bike to ride in certain conditions, it is inexpensive enough to be a good entry-level cargo bike, and riding it is much less hassle than hauling a trailer. 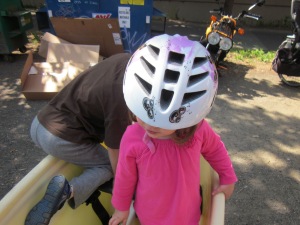 My son could self-load, my daughter could not.

The Madsen is a bike I had only ever seen in Seattle, although I recently learned one family has one in the East Bay and another family will soon be riding a Madsen with BionX in San Francisco courtesy of The New Wheel. Davey Oil pointed out not long ago that cities have certain family-bike personalities and he was dead on. Seattle has Madsens and Surly Big Dummies (at least 5 of each at the Seattle Cargo Bike Roll Call). Portland has child trailers, trailer-bikes, and box bikes: Bakfiets and Bullitt and Metrofiets. San Francisco has commuter bikes with child seats, trailer-bikes, family tandems, Xtracycles (even an Xtracycled family tandem), and in the last year, a spate of Yuba Mundos and elMundos. But you almost never see child trailers here.

The pros of the Madsen:

The cons of the Madsen: 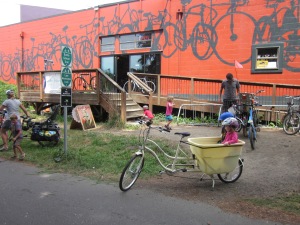 The Madsen got a lot of attention. One woman asked if we’d built it ourselves. Ha ha! No.

When I first looked at the Madsen it seemed to have many of the same pros and cons as a trailer, but riding it made me realize it’s actually very different. Compared with the mountain bike + trailer we tried, it was much harder to go uphill and much safer going downhill. The Madsen held twice as many kids, while the trailer was much less likely to tip. The trailer had better weather protection, but the Madsen was more fun for the kids on a sunny day because they could see more. A trailer is quieter. However if you like the color pink or buy at the end of the year, it is possible to buy a Madsen for less than the cost of a bike plus a trailer, assuming that you don’t already have a bike.

I felt no real desire to get a Madsen after trying it, although it was fun to ride for a while. It was too much of a struggle on the hills. I got the sense that a number of families in Seattle who started with Madsens eventually moved to Xtracycles or Big Dummies. I think the Madsen would be best for hauling kids who are younger than mine (ages 3.5 years and almost 7 years) in an area without significant hills. However, older kids and hills are the sticking points for most of the cargo bikes we tried, so this isn’t a complaint that’s specific to the Madsen. Overall, the ages of our kids and the local terrain make the Madsen a poor choice for us. So while this is clearly the right bike for some families, it’s wasn’t right for ours.

21 responses to “We tried it: Madsen”