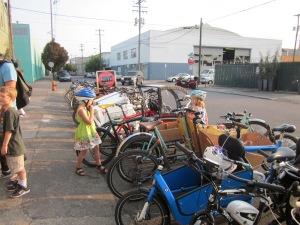 In August we rode a lot of cargo bikes trying to find the one that would work for us. We wanted a car-replacement cargo bike that could take two kids and their gear up and down some of the steeper hills of San Francisco. We had headed to Portland to try every plausible option in the multiple shops catering to family bikers there. It felt like a charmed trip, a no-lose proposition.

But by the middle of our week in Portland I was feeling depressed. I had spent much of the day wobbling through the streets of Portland with all the grace of a concussed bumblebee on the rental Bullitt. Matt had dumped the kids on the way home on the rental Big Dummy. It was miserably hot. We had tried every reasonable two-kid hauler we could find, and we still couldn’t figure out what to get. There were other bikes we might have tried given more time, like the forthcoming Xtracycle Edgerunner or a CETMA Largo or the incredibly elusive Urban Arrow (no one can tell me whether this bike even exists), but for various reasons these bikes were unavailable for at least the next few months. And even if we waited there was no guarantee we’d like them.

In hindsight it sort of surprises me that at that point we didn’t bail and decide to buy another car. We had lived without a car long enough at that point that it didn’t seem like the answer (it’s not). I did seriously wonder whether we should just ditch the idea of getting a big cargo bike and stick with the MinUte (short answer: no). For a moment it seemed appealing because we liked the MinUte, we could both ride it without dropping our kids, and it could handle the hills. But as an everyday ride for  our two older kids: no way. When kids scuffle on a midtail deck it’s like a cockfight: there’s no place to run. Trying to ride with them on the MinUte sometimes works beautifully but often means making a City CarShare reservation. Having to do that once a week is not expensive compared to owning a car (about $6 per trip–unbelievable! the same as Muni fare!) but it’s a hassle. And we still get stuck in traffic and have to figure out where to park. For the sake of our sanity, we’d all rather be riding a bike.

To make living without a car workable right now, and for me to manage shuttling two kids around while still making it to work on time during Matt’s overseas business trips, we needed a bike I could use to carry both kids at once. After riding all those bikes, there were four that we believed could work for our situation (to recap: two kids ages 3 and 6 in different schools, steep hills, heavy car traffic). Two were front box bikes and two were longtails.

These are all great bikes, and all of them can be made into serious climbers with an electric assist. I’d recommend them to anyone looking for a family bike (and not just them). All of them make appearances in San Francisco. Of those four, we ruled out the Metrofiets and the Yuba based primarily on size and hassle factor. The Metrofiets is one of the longest front loading box bikes—we loved the space in the box on that bike, but pushing it out into intersections made us nervous even on quiet Portland streets, and parking it would be a challenge in San Francisco. The elMundo is short, but the bars sticking out from the sides in the back made the bike wide enough that it was difficult for me to feel comfortable navigating in traffic when I rode it. In addition, given the demand we’ve placed on our bikes in San Francisco (sometime I will list all the parts on the MinUte that we replaced after they broke due to the hills, crappy pavement, and dirt of San Francisco—thankfully under the first year’s warranty) we would only have considered buying the Mundo as a frame kit, building it up with much better parts than come stock, and upgrading the weaker eZee assist to a BionX. That seemed like a lot of work for a bike I hadn’t fallen in love with.

Splendid Cycles was right: the two bikes that seemed like the best bet after we’d ridden many bikes were the Big Dummy and the Bullitt. Both bikes could carry both kids and both bikes could handle the hills we threw at them. Both of them were narrow enough to handle tight squeezes, either on the move or when parking on the sidewalk. The Big Dummy was easy to ride and despite my initial concerns about weight limits, we saw ample evidence that people could take two older kids up hills on it (and sometimes three). But the kids were in back where we couldn’t talk to them and we kept dropping the bike. The Bullitt was a better climber, and allowed us to keep the kids in front and separated. But we were still having trouble with the steering.

I started considering stupid decision rules. Like: all the bikes I’ve owned start with the letter B! Breezer (RIP), Brompton, and Bridgestone (the mamachari). I should get the one that starts with the letter… shoot!

But then I remembered the advice that guided me to the Brompton, a bike I’ve never regretted getting: buy the cool bike. The person who wrote that was advising people to buy the bike that they most wanted to ride, even if it was impractical. But neither of these bikes was impractical. We couldn’t lose. So the next morning I loaded up the kids and got on the bike I most wanted to ride. We took off without a wobble. It felt like flying. It felt like a miracle. We bought the Bullitt.