When we started riding with our kids in San Francisco, we faced two big issues: hills and traffic. Okay, there was also the wind. It’s really windy. I’ve gotten a lot stronger, though, and what’s more, an electric assist will resolve nearly any hill and wind problem. Soon we’ll have two assisted bikes. So I label those problems: solved.

This is the western approach to my office at Laurel Heights. There are a lot of tight squeezes en route.

The traffic issue was initially really intimidating. It is illegal for adults to ride bikes on sidewalks in the city, for good reason: there are lots of people walking on them. There are a lot of cars on the street. Cars in San Francisco pass really, really close. They are occasionally going much faster than we are, although that happens less often than you might think. Yet cars are big and heavy and could quite literally crush us like bugs. When I started riding there were occasional moments of sheer terror, like when I hit an unexpected stale green light while crossing an eight-lane intersection, and it cycled through yellow and on to red before I’d made it halfway across. There were times that cars turning next to me felt so close that I seriously thought they were going to mow me down, and I ran the bike up onto the curb.

Cars tend to hug the yellow line when passing bikes on my morning commute.

Yet there were only so many perceived near misses I could experience before recalibrating my definition of what was dangerous. San Francisco drivers don’t give anyone much space, but I know from talking to them that they are not trying to be intimidating. The roads are narrow and people in cars are used to passing other cars with only inches to spare. Cars get dinged up in the city as a matter of course because the standard approach to parallel parking in a small space is to back up until you hit the bumper of the car behind you, then move forward until you hit the bumper of the car in front of you, etc. City cars carry scrapes along their sides from tight merges. By the standard drivers apply to each other, you actually get a lot of room on a bike. After experiencing the first thousand close passes I simply couldn’t perceive them as life-threatening anymore. Would I prefer a three-foot passing rule? Heck yeah. But thanks to AAA and Governor Jerry Brown, that’s not going to happen anytime soon in California. 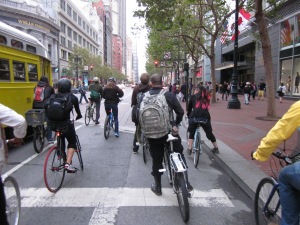 We have adjusted. By the standards of people outside the city, I realize we must now look like psychotic bike messengers. I have no problem weaving through a two-foot gap alongside a line of stopped cars. Matt and I have both threaded through spaces much narrower than that with our kids on deck by heading to the right hand curb, leaning the bike a little, and pushing along with the curbside foot until we’ve passed, say, a broken-down bus whose driver is trying to reattach it to the overhead wires. Yet I don’t think of myself as particularly aggressive. I don’t run red lights, and I stop at stop signs. I’m not thrill-seeking; squeezing through pinch points is par for the course when riding on certain streets. Nor, for that matter, is anything I’ve done remarkable by the standards of San Francisco cycling, with or without kids involved.

Our son waits for the left turn signal to merge from the Wiggle to Fell Street on a recent Sunday. He was singing to himself when I took this picture.

Our kids have adjusted to city traffic even better than we have. My daughter occasionally taps on the windows of cars that pull up next to us at a stop, just to say hi. We’ve often held conversations with drivers and passengers at intersections; in many cases they’ve pulled up within a few inches specifically to talk to us: “Did you know your daughter is sleeping in the back?” “Where did you get that bike?” My son is unperturbed by traffic that I still find intimidating, and we have had to convince him not to do his tricks (“Look! I can put both feet off to one side!”) Kids are allowed to ride on the sidewalk, and because he’s aware that he tends to weave a little going up hills, he peels off our little peloton to the sidewalk when we head uphill so he has some room, and then slips back between us at the next curb cut when the ground levels out again. Along the Wiggle, there is a merge point where bike traffic is shunted across the travel lane into a dedicated bicycle left turn lane that runs in the middle of the road for a full block, and he cheerfully navigates this lane with cars rumbling by a few inches away on either side. 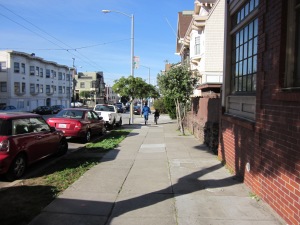 Our son learned to ride on these streets and sidewalks in our neighborhood.

Normal is what you’re used to, and after the first couple of months of riding I never thought about any of this until my mom came to town. I wanted her to have a chance to ride the mamachari, her first spin on an assisted bike, and one that was her size to boot. I figured we could ride a little on (what I perceive to be) our quiet neighborhood street, which is where my daughter rides her balance bike. No problem, right? She was worried about the traffic. “What traffic?” I asked. By traffic she meant there were cars. There were cars driving on our street, maybe 3-4 every minute on a quiet afternoon. I said we could walk down the hill to the park and ride there, in the parking-protected bike lanes. I didn’t realize when I made this offer that she meant she wanted to ride someplace with no cars at all. It turned out that by her standards even the Panhandle path, which is completely separated from cars, was too busy (and I didn’t even consider taking her there because the access points to the Panhandle are too heavily trafficked).

Usually I feel pretty good about these parking-protected bike lanes in Golden Gate Park (even though cars park overlapping the buffer zone).

So I took my mom down the hill, and she gamely got on the bike. And every time a car came within five feet of her, which was basically constantly, she was so frightened that she fell off. Even the parking-protected lanes freaked her out. She asked me to ride ahead. It turned out that this was because at every intersection, she dropped the bike when cars pulled up alongside. All of the drivers who saw this politely stopped, waited for her to get back on, then moved forward as she did, and of course she would fall off again as a result. When I figured out what was happening I felt like such a jerk. By that point my mom was drenched in fear-sweat and trembling and begged to walk the bikes home. She was terrified to ride in the city. She barely got a chance to try the assist. She liked it though. That was the only redeeming feature of the whole experience.

So hey, I’m a lousy kid! I sent my poor mom into a tailspin of terror. My only excuse is ignorance. I had no idea. I guess people really can get used to anything.

This is my normal route to work. Cars stop in the bike lane for school drop-offs; riders have to weave around. This registers as “annoying” now.

Whether people should have to get used to anything is a different question entirely. There is something deeply wrong with this city if its streets are terrifying to strangers, if they’re something that you have to get used to. And it’s not being on a bicycle that’s the issue: my mom won’t drive in San Francisco either. The result would be nearly the same: sure, she wouldn’t fall down behind the wheel of a car (yes, I’m a jerk) but she would still end up trembling and terrified. There is just so much going on. Drivers, particularly weekend drivers from out of town, get overwhelmed: on the way home from work on Friday night, I watched a distracted driver nearly roll his car over a pedestrian in a marked crosswalk (we talked after the oblivious driver had passed; he was shaken but fine). I can now spot suburban drivers out of their element pretty quickly and take evasive action, but why should this be necessary? A far better solution is many fewer cars moving much more slowly. 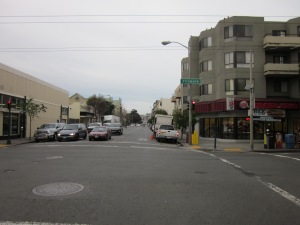 It may not sound like it reading this, but I feel much safer on a bike in difficult situations than I do in a car. I am not trapped in a lane. I can run up onto the curb or between parked cars if I feel threatened. In the worst case scenario, I can move onto the sidewalk and walk the bike. With rare exceptions, I do not travel on streets where traffic moves fast anymore, which inevitably merge with streets where traffic moves slowly, at which point there are collisions. We do rent cars occasionally, but I avoid it when I can because in a car, we are stuck in traffic. If a distracted driver becomes a threat, there is simply no place to go. Given that the current street design makes collisions inevitable, I’d rather be riding in a bus if we have to get involved. The bus always wins.

We ride on the Webster Street bike lanes to take our son to school. If our timing is good we meet other Rosa Parks families en route and make a bike train. If not, we wave to friends in cars.

Like everyone else I know who travels regularly by some mode other than a private car, I have always been a big fan of what advocate Gil Penalosa calls 8-80 streets: streets that feel safe to anyone from ages 8 to 80. Yet I never really understood what that meant until last week on a bike with my mom. I thought it meant things like the parking-protected lanes in Golden Gate Park where I like to ride with my kids, where they can bob and weave without risk of being run over. But those kinds of tricks with paint are the tiniest part of safe streets. In a parking protected bike lane my mom was still afraid. Riding with my kids, neither of whom is even eight years old yet, led me to underestimate the need for safer streets. My kids are fearless. They have adapted.

This is a safe street: on Sundays (and Saturdays from April to September), JFK Drive is closed to cars.

I realize now that safe streets are something else entirely. They would save us from ourselves. I’m glad I can navigate the streets of San Francisco as they are now on a bike, but I’m appalled that I didn’t remember that it was something I had to learn. If I hadn’t ridden with my mom last week, I would never have realized how much more change is needed.

4 responses to “The traffic problem”