Happy belated birthday to Hum of the city! 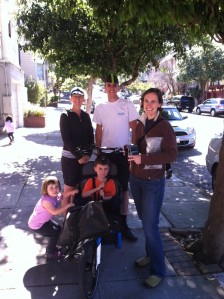 Hey, I forgot my blog’s birthday. I’m so embarrassed! What can I say? There’s been some other stuff happening. Thank you, California, for funding public schools.

I started writing about riding our bikes on November 2, 2011. Writing about riding bikes isn’t as fun as actually riding bikes, but I have no complaints. It’s been a pretty great year, with lots of chances to meet other families, ride in other cities, and pick up some new bikes. And hey, we sold our car. I totally wasn’t expecting that. Last weekend, we met up with another San Francisco biking family we’ve known for a few years, and found out they just sold their car too.

I don’t delude myself that the United States is on the cusp of a wholesale transition to using bikes for transportation, even though it would make sense in many places. And I sympathize to some extent. Riding bikes is still pretty freaky and counter-cultural even in a place like San Francisco, which is so laughably counter-cultural that conservative media commentators practically cross themselves just saying the name. 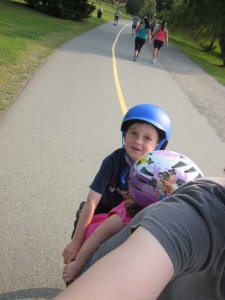 Our two kids on our first bike, the Kona MinUte, laughing all the way

But we’re not alone out there. Last weekend I was out with a mom from our son’s school while she test-rode a Yuba Boda Boda. She sold her car on Friday and ordered the Boda Boda. When I asked why she wanted to buy a bike instead of a replacement car, she said, “There are so few chances to have fun once you grow up. Riding a bike is fun!” I couldn’t have said it better myself.

Thanks for hanging with me, bikey people.

5 responses to “Happy belated birthday to Hum of the city!”