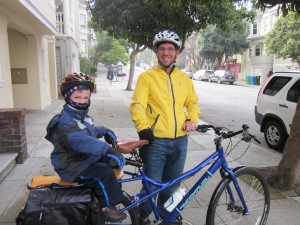 The MinUte deserved better than an ignominious end.

On Friday the Kona MinUte was stolen. Normally Matt rides with our son to school, drops him off, and then heads into work, where he keeps the bike inside his office. But on Friday he had a morning meeting, so after the school drop-off he rode downtown and locked the bike up to a city rack. When he came back it was gone. 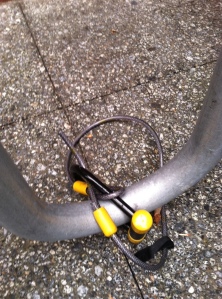 U-lock untouched, cable snipped, and the bike is gone.

When your bike is stolen, everyone has a theory. He had locked up, after some consideration about the best option, at what he felt was the safest place nearby, the busy and very public Yerba Buena Gardens. I thought at first that he must have inadvertently have locked up to a sucker rack—one where the screws had been loosened to allow easy theft. But this was a legitimate city rack, both screwed and epoxied into the ground. Matt rides with a high-quality Kryptonite lock and uses it both and a cable whenever he locks up outside. The Kryptonite lock was untouched. Both the police and our local bike shop believe that the only possibility is that the MinUte it was stolen by thieves with an angle grinder, who cut the frame, loaded the bike into a van, and took it away to strip it for parts at their leisure. This is unfortunately a familiar story in San Francisco, although it happens more commonly with bikes left overnight. 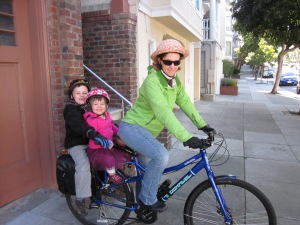 I wouldn’t carry two kids on a $50 beater bike from craigslist (which was probably stolen anyway).

Some people have suggested that if we don’t want our bikes stolen, we should really be riding crappy beater bikes instead of nice cargo bikes. However there is a limit to how crappy a bike we can ride safely with our kids on board. And rest assured that crappy bikes are stolen too. Our son’s school principal had a beater he used to ride down to Civic Center for district meetings, which he left locked to a wrought iron fence with a U-lock. Then one afternoon he came out to find that thieves had sawed through the iron railings to steal his rusty bike, whose value he estimated at roughly $20. The district was less than thrilled about the cost of repairing the fence, and he had to find another way to get to meetings. I have heard similar stories countless times. Thieves are indiscriminate and they can’t be undersold. And any bike you ride regularly is a pain to replace, even a cheap one. 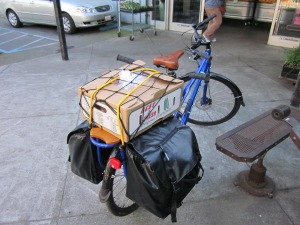 The MinUte could do almost anything–and we assumed that it would be around forever.

As victims of bike theft go, we are pretty fortunate. Our bikes are covered by our renters insurance, and although I resent that we’ll have to pay the deductible, we can afford it. We have more bikes than people in our stable, so Matt still has something to ride (he has been riding the Bullitt). Our local bike shop is preparing an estimate for the insurance adjuster so we don’t have to do it ourselves. And they are already investigating our options for a replacement—given that bike manufacturers are just closing out 2012 models and switching to 2013, this may be more complicated than we had expected. 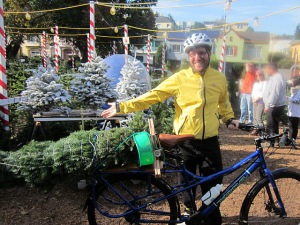 Is there anything we could have done differently? The one thing that comes to mind is locking skewers. On the advice of a friend who has been locking up a wildly expensive bike around sketchy neighborhoods in San Francisco for over five years without it being stolen or stripped, we put Pitlocks on everything on the Bullitt (and they’ve already prevented the saddle from being stolen). If the MinUte had been Pitlocked, it would not have been worth stealing for parts, because they couldn’t have been removed even with an angle grinder. Our replacement bike will be Pitlocked to the hilt. 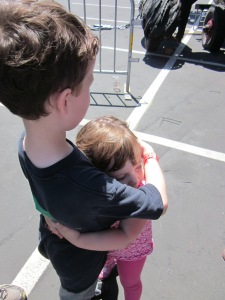 The kids are still confused about where the MinUte has gone.

Anyway. We were pretty depressed about all of this on Friday. The MinUte was our first bike, and the bike that made us realize we really could ride everywhere with our kids. We had put a lot of time and effort into making it work for our lives. We were fond of that bike, and the thought of its frame being casually cut with an angle grinder so it could be hauled away and disassembled is vaguely nauseating. What a waste.

I am more sanguine now (although we still have moments of “DAMMIT!”) Nothing in the world is permanent. Even our children will leave us one day. We did the best we could to protect the bike from theft, but anything can be stolen by someone who wants it badly enough. We are fortunate that the bike was insured, and that it was not the only bike we have. And in the grander scheme of things, I have no doubt that our lives are better than the lives of the people who stole it. We miss the bike, but we’ll be okay.