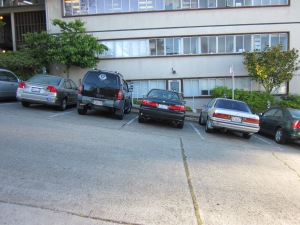 This is the approach to preschool hill, in a drier season.

Lately the road to preschool has been slick due to a mysterious water leak, and with the cold the street is icing up. The university put down sand but cars are still slipping backwards on the hill (which actually happened to us once too, back when we owned a car, and which is absolutely terrifying).

Mornings this week I’ve come out to the sound of motors gunning as people try to power through the ice slick. San Francisco hills are far too steep to be scalable if there were actually ice on any regular basis.

But our assisted bikes are okay even on a steep and slick hill. It’s still not a fun trip, but it beats walking, and I when I see or hear cars losing traction I can peel off onto the sidewalk. But most drivers wait at the bottom of the hill until we get to the top. Even when the street is dry, they slow down to avoid passing us. Everyone moves pretty slowly on the uphill trip no matter what, frankly. Preschool hill is steep. It makes me paranoid about my brakes.

Anyway, I don’t see a lot of other parents riding bikes, although last year I met one dad on an assisted bike (a Walmart type model scored on craigslist), whose daughter is now in kindergarten. And occasionally there are parents who try the hill unassisted while hauling a trailer or child seat, walk in dripping with sweat, and vow while gasping for breath to never do it again.

At last there are two bikes at preschool drop off.

That is, until yesterday, when I saw another bike snuggled up to the mamachari after I dropped my daughter off. I could hardly believe my eyes until I got outside: it was an assisted EdgeRunner! It was made exactly for this kind of job. I still don’t know who’s riding it, but it’s nice to have company at last.

One response to “Scaling preschool hill”