Riding around San Francisco I’ve noticed a difference between women and men on my daily routes. Put in the starkest possible terms, the difference is that women follow traffic rules. It’s not true for everyone, but as a percentages game, if you’re wondering whether a rider in San Francisco will stop at a red light, the odds are pretty good that she will and he won’t.

I am one of the tedious people; I stop at red lights and stop signs. It doesn’t seem to slow me down much compared to the people buzzing through them—I always catch up to them by the next intersection—and I figure the extra margin of safety is worth starting and stopping more often. I understand why some people don’t; it is beyond tiresome to be honked at regularly by drivers behind me who did not expect or want me to stop at traffic signals, which happens at least once a week. But I guess I’m just a slave to authority.  Plus I figure I have my hands full already dealing with the thousands of drivers in this city who think they have the right of way when they’re turning left at an intersection and my bike is going straight in the opposite direction. Which for the record, they don’t. So if you’re in a car and wondering why I don’t just go already when the light turns green, now you know.

Sometimes I am simply appalled what I see. Last week while riding to work I ended up behind a man on an Xtracycle with, yes, a child seat and stoker bars on the deck, but thankfully, no kids on board at the time. He jumped every red light on our route, but sadly never got far enough ahead of me that I didn’t have to see him anymore. While he was running one red light, the driver of a pickup truck that had started to cross the intersection on the green braked suddenly as he popped out. “What the hell do you think you’re doing?!?” Xtracycle dad screamed at the driver. At the next red light, he actually stopped, but only to take a drink of water and spit it out onto the car stopped next to him. It was closest thing to bicycle road rage I’ve ever seen, and it was deeply unnerving to think that this man rode with children. 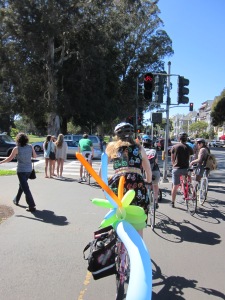 Anyone going to run this light?

The next day I rode the same route behind a woman in the full roadie kit. Unlike the dad on the Xtracycle, she stopped at every red light, occasionally sighing like I do when men on bikes jumped past us to run the red light. Then she’d calmly reel them before we reached the next light (I usually ride this street with the electric assist turned off, but I was so interested that I turned it on to keep up with her).

I have days when every intersection is like this. I stop at a red light, and if there are any women on bikes nearby, they stop too. If there are men on bikes nearby (unless they happen to be my husband), they blow through the red. Then I catch up with them at the next intersection and we do the same thing all over again. What on earth do you think you’re gaining? I think. Why is this difference so gendered? I wonder. But there it is.

7 responses to “Women and men”