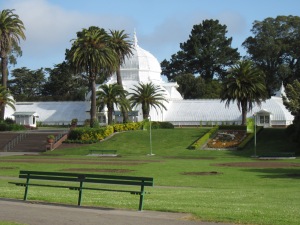 Who wouldn’t want to ride in Golden Gate Park?

On the western side of San Francisco there are many excellent bike lanes through Golden Gate Park, which stretches nearly half the length of the city. Even outside the park to the north and south the streets are pretty quiet (with a few exceptions), so it is very easy to get around by bike as long as you don’t mind the hills. Which whatever, where besides the Mission are there are not hills in this city. 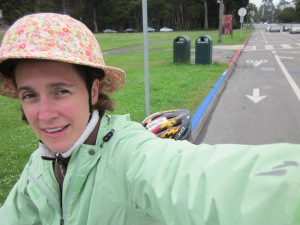 Transitioning from the park to the Panhandle

At the edge of the park the Panhandle begins. The Panhandle is a one-block-wide, ¾ mile long stretch of greenway, and it extends even further east. A nightmarish three blocks at the far edge of the Panhandle then drop you into the Wiggle, and from there bike lanes, some protected, run all the way to the eastern edge of the city and San Francisco Bay. (Protected bike lanes for those three blocks of Oak Street have been in the works for some time and postponed repeatedly.)

Unfortunately the streets on either side of the Panhandle, Fell and Oak, are basically freeways in the middle of the city, and noisy. There is a break in the middle for the death highway of Masonic Avenue, which even with a dedicated bike signal is not the most fun street to cross. Supposedly Masonic is a designated bike route. Ha ha.

There is a lot of foot traffic on the shared-use path.

There are two paths on the Panhandle: the southern path along Oak is a pedestrian-only path, and the northern path along Fell is shared-use. For reasons that mystify me, runners and walkers mostly shun the southern path and so there are always multitudes wandering idly among the bikes. And there are always off-leash dogs. A couple of weeks ago I slowed when one came close, but not fast enough because it suddenly jumped right into my path, knocking me and my son to the ground. My son fell under the bike and although he was unhurt, he was so upset that he burst into tears. The dog ran off. Of course its owner was nowhere to be found.

So anyway, although the Panhandle has its appeal–no car traffic to contend with–it has some issues as a place to ride.

There is an alternative. Like all alternative routes in San Francisco, it is steeper. Heading east, Page Street runs above the southern edge of the Panhandle then drops down suddenly to join the Wiggle. In reverse, obviously, it goes up just as suddenly.  I know many riders who prefer Page Street to the Panhandle. They tend to be solo riders.

Recently, to celebrate St. Patrick’s Day, we headed out for Mexican food (eating out contrary to ethnic expectations on holidays means never having to wait for a table). Because we were already south of the Panhandle we took Page, which we don’t normally ride. It was nice; there were multiple sidewalk sales, and families were sitting out on their front steps chatting with each other. Even though there are lots of stop signs to slow you down, it is a pleasant alternative to the Panhandle in the downhill direction.

After dinner we had the choice of following the Wiggle back or turning around and climbing up Page. Matt had both kids in the Bullitt and to my surprise he wanted to take the hill. As he headed up, a pickup truck going down the hill slowed, and the driver stuck his head out the window. “GIT IT, OLD MAN!” he cheered. “GIT IT, OLD MAN!” I laughed so hard I almost fell off my bike. Oh how I love San Francisco. 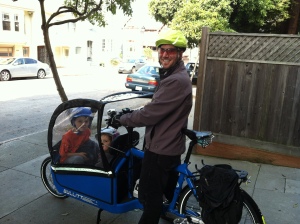 We made it back to Golden Gate Park with only the usual stares that the Bullitt draws from families walking on the street. I scratched Matt’s back at a stoplight and said, “Git it, old man.” He laughed. “He was supportive,” I said, “That’s what matters.”

“He was ACCURATE,” he replied. “Like I care. I’m fitter now than I ever was in my so-called prime.” And this is true. We have been married for 14 years, and by any historical standard Matt is smokin’.

I’m used to the Panhandle and its quirks. But I can see us taking Page more often in the future too. Git it, old man!

6 responses to “To Panhandle or not to Panhandle”