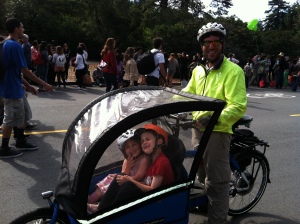 We love having the Bullitt to haul our kids (and a lot of other stuff) around San Francisco, and I continue to be impressed that we can squeeze a 4-year-old and an 8-year-old into the standard front box with minimal squabbling. And with the rain canopy they never get cold or wet. Sometimes we don’t even bother to put on their shoes. However I began to wonder after a while whether riding in the box was possibly too appealing.  We got our son a geared bike for his birthday last year (a Torker Interurban, more on this bike later) when we realized that trying to get a single speed bike up the hills around our neighborhood was making him hate riding. For several months it seemed like we had waited too long. In combination with his general neophobia, he mostly ignored the new bike and asked to ride in the Bullitt instead. Our daughter loves her balance bike but was too short to get on the trailer bike or a decent pedal bike.

Ultimately I decided not to worry about it. I figured they’d want to ride more on their own eventually, probably when temperatures crept up in the spring, at which point we’d also have moved downhill. I find the riders who pull up next to us and shout “you should make them pedal!” beyond tiresome. Getting up to Parnassus Heights is no joke for strong and experienced riders, even with an assist, let alone little kids. How about I don’t tell you that you look stupid in lycra hotpants, and you don’t tell me how to get my kids up an 18% grade, mmmkay?

And yet. To my surprise, over the last month, both kids have decided that they want to ride on their own. Our daughter’s legs finally got long enough that she could hop aboard the Roland and actually turn the pedals (a side effect of getting a German trailer-bike that I hadn’t considered is that Germans are crazy-tall). Our son flipped a switch in his head one day and decided to try riding his scooter to the library, and realized almost immediately that scooters are much slower than bicycles. The next day he wanted to ride his bike instead.

Heading out on the Torker Interurban

So now on weekends we are a family caravan. Our son rides his own bike, and our daughter rides the trailer-bike hitched onto the Bullitt. Sure, she hasn’t yet completely mastered the idea that you want to move the pedals forward while going forward, but she can give a noticeable assist when she does remember. Our son, with much encouragement, finally realized that shifting into a low gear to go up hills is neither difficult nor shameful, and he is chugging up some pretty impressive grades. Aside from some trouble with braking on steep downhills (which I completely understand because I’ve been there) he is a capable and safe rider. The front box is now available for friends or groceries or library books, or we can put one of our kids and/or the little bike in there if the ride gets too long or cold or hilly. 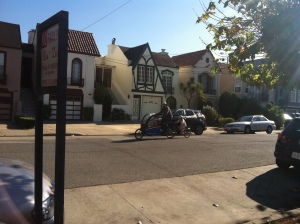 It’s hard to see, but Matt has a 4 year old and 2 year old in the front box as well as our daughter on the trailer-bike.

I expect that there will be some backsliding into the comfort of the Bullitt box when winter digs in, but I can see the future from here. We still have some logistics to work out, because the bus that takes our son to his afterschool program does not have bike racks (yet! In the meantime I have contemplated getting him a Brompton.) Sometime next year we’ll have moved to the bottom of the hill, and the prospect of getting home after a long ride will not seem nearly as daunting to them. And once we live on a quiet and flat street, our daughter can practice riding a pedal bike near home. I worried once that we’d have to coax them into riding, but they started when they were ready.

Eventually we won’t have to carry them at all. But we’ll keep the Bullitt, of course. I love that bike, and I hear that teenage boys eat a lot of groceries.

4 responses to “Growing up”