Another December means another trip to get a Christmas tree by bike. So far we have failed to match the experience of carrying a tree by bike that we had in the first year, which was laughably easy. Last year the tree fit in the bike just fine, but Matt dropped the Bullitt and lost one of the support struts holding up the rain canopy, which left the kids miserably cold until we got the new part. That meant the post-tree hauling experience was less than fun.

Christmas tree on bike, yet again

So this year we switched back to the MinUte because I was paranoid about losing a support strut again, even assuming that we removed the canopy in the garage. It turns out that a midtail is great for a smaller tree, but a 7-foot tree with attached stand is a bit beyond the scope of our bike. Matt rode for part of the trip and walked the bike for part of it. The tree was firmly attached with bungees, but so back-heavy that the bike wanted to do wheelies. Maybe it would work if we were heavier riders. Next year, it’s back to the Bullitt (with an extremely careful removal of the canopy and full parts inventory before departure). 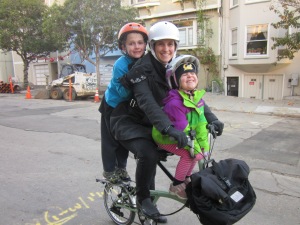 Moving up: two kids on a Brompton, now aged 8 and 4

However we did resurrect last year’s tradition of me riding the kids home on the Brompton. This was a bigger challenge than last year given that I’m not as strong as I used to be. For the last hill my son jumped off and walked with the tree-bike, so I was only carrying my daughter. Ultimately I made it up a decent hill on an unassisted bike with my daughter, who is now pushing 45 pounds, in the front seat. Not bad.

Although I tend to think bringing a tree home by bike is nothing special when I see all the cargo biking families who’ve posted pictures of themselves doing the same thing, it is evidently still pretty avant-garde here in San Francisco, because the lot manager recognized us from previous years. He did report that some families bring their tree home on scooters. And although our hauling strategy has not yet been perfected, it still beats waiting for one of the hotly contested spots in the parking lot and vacuuming a gazillion pine needles out of the car, an experience which historically made us reluctant to buy a tree at all. It is a big deal that we’ve now had some kind of tree three years in a row, as we’re (a) technically a Jewish family and (b) pretty lazy about the whole getting-stuff aspect of the holidays (my kids typically score socks for Christmas). In my defense, though, I always take the two weeks of school holidays off and spend gobs of time with the kids.

We need happi coats if we’re going to join the mochi pounding crew.

On Sunday we went to our daughter’s preschool for a winter concert and mochitsuki, which was a bit early for a mochitsuki but pretty incredible nonetheless. Watching a pile of sushi rice turn into a gelatinous mass of delicious mochi is one of those have-to-see-it-to-believe-it experiences, plus we got to eat the mochi. My only complaint about the experience is that the bike parking around Japantown is pretty substandard. But evidently the car parking situation was worse, as a bunch of families arrived late.

P.S. A zero-waste Christmas extra: my gift wrapping strategy. We are pretty mellow about the present-aspect of Christmas, but there are some gifts under the tree. One year my son even got a bike (the bike was left unwrapped).  But most gifts are wrapped in fabric. Thanks to our exposure to Japanese culture, I picked up a few furoshiki in Japantown years ago to wrap gifts, and I reuse them every year. (For furoshiki wrapping techniques, ask the internet, which is almost as eager to teach people how to use furoshiki as it is to teach people how to wear scarves.) When I run out of furoshiki—I didn’t buy a lot because they are kind of pricey for something I use few times a year—I wrap gifts in my scarves or in our flour sack dish towels, which are free because we already own them. I know, know, dish towels: classy! But they are big and square and hey, white is a Christmas color. For larger gifts, I’ll use a pillowcase. And for huge presents, well, we have sheets and a fabric shower curtain. A watercolor pencil will write on fabric and come out in the wash, allowing the lazy wrapper to skip not only wrapping paper, tape, and ribbon, but a gift tag as well. Some people make their own furoshiki, or pick up square scarves while thrifting, but ever since I had the dish-towel insight I just can’t bring myself to make the effort.

The tree at home and decorated

Presents for other people typically go out in a glass jar that would otherwise have been recycled, a flour sack dish towel that I wouldn’t be traumatized to never see again (they’re cheap), or some of my kids’ artwork (always my first choice, but not always available in appropriate sizes).