We tried it: Urban Arrow

As promised, the lede in 6 words: 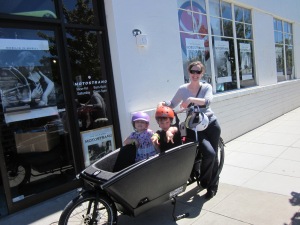 Check it out: Redwood City has Urban Arrows and sunshine, too.

I have had a couple of recent conversations with cool bike people recently that brought up something that has been in the back of my mind for a while. My feeling is that the family biking market is still pretty nascent and as a result there are mostly two kinds of bikes out there.

On the one hand you have the macho bikes. The view of family biking by companies that make these bikes ranges from, at best, detached bemusement (e.g. Larry v. Harry, which developed some basic kid accessories like a child seat and rain cover, but has never seen any need to mention them on its website or anything), to disinterest (Kona—“oh, you can carry kids on a bike?”—and Brompton, which as a company seems unaware of the aftermarket Pere child seat), to outright hostility (e.g. Surly and its new kid-unfriendly Big Dummy deck, Trek and its no-kids-allowed Transport). But to their credit, these companies put a lot of effort into (relative) nimbleness. In the universe of cargo bikes, these bikes are lighter, have better parts, are fitted with gears that can handle hills, and are safer and easier to ride in challenging conditions, by which I mean any conditions other than a flat street on a sunny day. (Okay, I exaggerate. But still.) And these bikes can go fast. Relatively speaking.

On the other hand you have the land yachts. These bikes are definitely family-friendly. They offer awesome kid-carrying capacity (even for large families), provide multiple ways to haul stuff/other bicycles as well as kids, and often have user-friendly accessories like integrated lights, step-over frames, upright seat positions, rear wheel locks and internal hubs. On the other hand, they typically weigh a ton and have a limited gear range and weak stock brakes, making them a challenge to ride on anything but the mildest of hills. And they are slow, even in the let’s-face-it-cargo-bikes-are-tanks class. I include in this category Madsens, Bakfietsen, Yuba Mundos, and every tricycle and unassisted mamachari I have ever seen or ridden.

The cargo bike market reminds me a bit of the car market in the 1960s. You could buy a station wagon (so practical! so massive! so slow!) or you could buy a “sporty” car, and hope for the best as you stuck your kids in a homespun “car seat” or harnessed them to long straps above the rear seat that offered a non-trivial strangulation risk. My mom hauled us around in a 1965 Chevrolet Corvair for years in those harnesses, because my parents believed in buying older used cars and keeping them until they literally fell to pieces decades later.

There are exceptions, and I have ridden some. On the longtail side, Xtracycle’s EdgeRunner is both family-friendly and nimble. On the box bike side, Metrofiets customizes almost all the bikes they make, so they can be tailored to weird cargo and/or families large and small, plus they start out as more-than-decent hill climbers and can be turned into awesome ones.

And there is the Urban Arrow. Thanks to an integrated electric assist, Urban Arrow turns a bike that is completely land yacht in character into something with many of the capabilities of a macho bike.

The Urban Arrow is a hard bike to find, let alone to test-ride, and the only people we know who have one bought sight unseen. Fortunately for us, Motostrano in Redwood City imports them, and will allow test rides whenever it gets orders in, if you get on the wait list. Motostrano is an interesting shop. From the outside it’s all posters of scantily-clad women draped over motor scooters, which definitely gave me pause. On the inside it offers a huge selection of assisted and unassisted commuter bikes (plus other kinds of bikes that I don’t care about, FYI). And they had boxes and boxes of bike stickers that they handed over to my kids. Pasting those stickers all over their clothes and helmets completely obsessed both kids while we learned about the Urban Arrow, and made them happier than anything else they did all weekend. We were glad that we made the trip down, which was, frankly, a not-inconsiderable hassle.

See, a foothole–there are so many nice details like that on this bike.

So the Urban Arrow: not the right bike for us, but definitely a cool bike. It reminded both me and Matt of the Bakfiets, but upgraded. It was like a Bakfiets that had gone on a makeover show: Harder, Better, Faster, Stronger.

I find that people tend to have a sense of what they want in a bike, even if they can’t always articulate it. There are macho bike people and land yacht people. If you are the former, this isn’t the right bike for you (and you know that already). If you are the latter—assuming that you don’t live on Twin Peaks—it’s probably the most perfect cargo bike ever made.

31 responses to “We tried it: Urban Arrow”