People of the bicycle 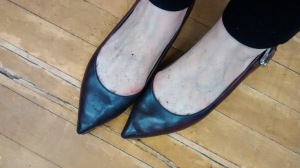 I think this study was conducted on the day that I realized it was time to get some fenders on my bike.

This week we got a notice from school that the San Francisco Unified School District Commute Study results were out. I had a vague memory of this study when it was in the field, asking people about how they’d gotten to school, which unfortunately happened during one of the rare weeks when it actually rained. So I have good reason to suspect that the active transportation numbers are an underestimate. How did our kids’ school do?

Relatively speaking, it’s totally awesome; more than four times greater than the citywide average. Objectively speaking, well, we’re a long way from Copenhagen. However, our kids are in a citywide program, so there is reason to expect more driving, rather than less of it. Yet there is less driving—a lot less driving.

I have no idea what the car commuting percentages are like in less urban locales. I presume based on talking to people who live elsewhere that, outside the districts that still maintain a robust busing program, basically everyone drives. As SFUSD points out in its flyer, walking and biking to school can improve health and concentration. However from my perspective the bus is a great option as well—no need to park, it’s okay to drink a glass of wine, the kids sometimes don’t get as wet, you avoid having to climb steep hills or cross terrifying intersections unprotected, etc. My suspicion is that SFUSD is underselling the bus option because it cut most of its bus routes to save money. Nonetheless, people using passive transportation at Rosa Parks take a lot of buses. In fact the school soccer team is called the Rosa Parks Buses (best name ever). Rosa Parks and buses, it’s like a thing.

Don’t even start with that “you can’t carry [X] on a bike” nonsense.

As mentioned, I suspect that overall this was an underestimate of the families using active transportation, but the relative numbers, given that our kids attend a citywide program, are enough to make the case that we are the people of the bicycle and the bus.

But perhaps you are, as yet, an aspiring San Francisco family biker, rather than an established one. And if you are like many of the people who email me, you may be wondering what bike to get. If so, have I got news for you. I mentioned a while back that Vie Bikes in San Francisco was planning a launch of a family bike rental program. Well, it’s here, with an impressive lineup that includes Bullitts, Boda Bodas, and the Butchers and Bicycles trikes. Apparently you need a promotion code if you want to book one; happily, anyone is welcome to use mine: HUMOFTHECITY001.

And last but not least, Sunday Streets is back in season, with the usual opener last weekend on the Embarcadero that we have not yet managed to attend in any year. On April 12th it’s in the Dogpatch while we are out of town, but we’re definitely eying May 10th in the Mission and June 14th in the Sunset (despite a date that all but guarantees maximum fog presence). Hope to see you there.

4 responses to “People of the bicycle”