I want to try the Tern Xtracycle for sure.

I used to write posts more often. Part of that was novelty value. The switch from driving everywhere to biking everywhere was pretty exhilarating and there was a lot to learn. There still is, but despite the fact that I have ridden more cargo bikes than anyone else I know who does not run a bike shop (and some people who do) I’m no longer the best person to assess the handling of family bikes, mostly because my kids, at ages 10 (almost 11) and 7, are really heavy. I still do it though, just on a very extended schedule.

We also still carry our kids on the bikes, but it’s almost always one kid at a time. They’re moving to riding their own bikes and our son is now old enough to ride the bus to school on his own (well, buses: there’s a transfer), or at least as much “on his own” as it is to ride the same bus as 100 other middle school students. We still commute by bike, sometimes by bus. We rent a car when we need to cross the Bay Bridge as a family (no bikes allowed on the western span) or when we go camping in Central California, or whatever. We take cabs to the airport. We take the train when it’s an option, which is rare, unfortunately. We do not miss owning a car, and in related news, we like being homeowners in San Francisco. 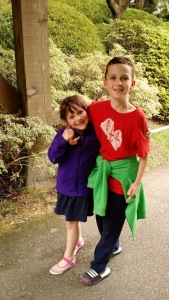 What people call “alternative transportation” is our ordinary life, and honestly, I kind of stopped paying attention after a while because it doesn’t seem remarkable. At least once a week, one of my colleagues stops at my office, and asks, “Did you bike to work today?” And I say, “Of course I biked today. I always ‘biked today.’”

Alternative transportation is not a bad term though, because it means that we have alternatives. We aren’t tied into getting places any particular way, or to a huge cost sink of a car. Looking for parking has long since become a foreign concept to me, and the biggest maintenance expense we have ever racked up on one of our cargo bikes was in the low three figures. And to this day, when I ride past the line of cars backed up at stop lights, or behind construction equipment, or in the endless wait for summer camp pickup, there is a part of me that thinks, “Suckers!” Obviously I have room for self-improvement.

We travel all kinds of ways, and I wish everyone could. Both Matt and I have aging parents who probably should not be driving, but they live on steep hills without transit on roads with a posted speed limit of 35mph, successfully designed to encourage drivers to take it to 50+mph (and they do), and there is definitely no 8-80 bicycle infrastructure; there aren’t even consistent sidewalks. Their only alternative to driving is to move. We know kids who grew up in places without transit or sidewalks, and to this day the thought of taking the bus terrifies them. Car culture doesn’t allow alternatives, and thus it traps people who are unable to drive, and similarly traps people who are able to drive into taking those who aren’t everywhere they need to go.

It doesn’t have to be that way, though, and here we are, hanging in in the new normal, proving that even carrying kids by bike can become unremarkable after a while. We see more families on the road with us every year; it makes the commute fun. When I was riding my daughter to summer camp earlier we saw another EdgeRunner with kids on it and she yelled, “One of us!” There are still plenty of people who haven’t tried it yet though. Every week, we get buttonholed by parents walking to their cars who say, “That bike looks awesome! Do you love it?” Yes. Yes we do. It’s still awesome.

2 responses to “An ordinary life”