Has it been a year? It kind of has.

One of the first cargo-type things we did with our first cargo bike, other than carry our own kids (typically one at a time), was to pick up a Christmas tree on it. It was only later that we added odds and ends like game tables and other people’s children (in value-pack combinations.) 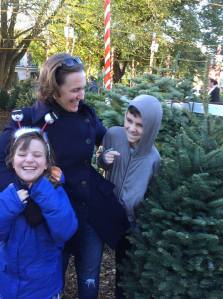 It’s getting harder to take pictures of the kids.

This year we headed to the tree lot early, because I am heading out of town for a while to visit my mom, who has been ill. Our son is now 12, and has glumly resigned himself to the prospect of having to go to the tree lot in the company of his parents and younger sister, which he finds embarrassing. Our daughter (now 8) is still delighted by the prospect of running around looking at the turkeys and running through hay bales, which I have come to appreciate because I now have evidence that it will not last forever. On arrival, however, both kids were charmed by the usual collection of things on offer that kind of freak me out: trees flocked in neon colors and inflatable snow globes. Their demands to get a flocked tree this year got them my usual public health killjoy response: “no toxic flame retardants in the house!” Ho, ho, ho. 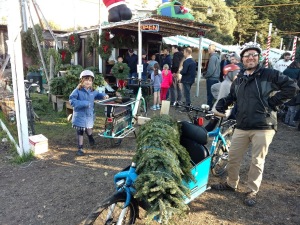 We are no longer the only people to ride to the lot, although I wouldn’t say that it is packed with bicycles. We are certainly no longer considered bizarre by the lot workers, who cheerfully heaved our tree into the bucket of the Bullitt, clearly pleased not to have to carry the tree out to the parking lot. However given that once again we ended up riding past a line of cars stretching back for two long blocks, it seems that most other people still haven’t figured out how much easier it is to ride. This remains one of the many household trips that I cannot fathom doing by car, because between the waiting to get into the lot and the strapping of the tree onto a car, the whole endeavor turns into a multi-hour process. We are not exactly decisive when it comes to picking out a tree, yet we still managed to ride away before some of the families waiting in cars had even reached the lot. That’s no way to live.

Heading home by longtail bike, with two kids on the back whose legs are really too long to sit together anymore, followed by a front loader carrying a Christmas tree, well, it seems that this is still the kind of thing that stops traffic—at least what little car traffic was moving. The other bicycle riders on the street, though, just waved. We all know what’s possible. 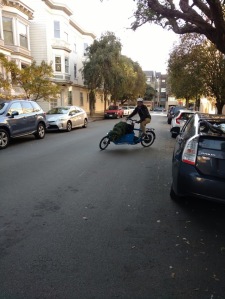 Like last year, our return home this year coincided with the return of our next door neighbor, also on his bicycle, from grocery shopping. The world is changing fast, in some scary ways, yet some things stay the same. Sometimes that’s all I can ask.

One response to “Christmas tree by bicycle, our 7th consecutive year”