What I learned in 30 days of biking 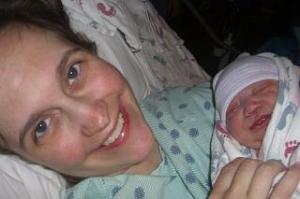 When we first had our son, our usual range of activities suddenly became very circumscribed. It was so intimidating to go out with a baby, and there was so much to remember to bring, that it felt like a huge triumph to load up the stroller and walk around the block. We were nervous that he would cry if we went to the library or a restaurant, so we didn’t go to the library or to restaurants. I didn’t like to feed him in public, so for quite a while we didn’t go any further than a half-hour’s walk to ensure we could be back home in time for him to eat or to take a nap.

As he got older, and we became more confident, we started to return to some of the places we’d known before, but even more than that, we began to discover new places to go. We walked to local bakeries and learned when the library offered story times. We remembered there were such things as children’s museums. We realized the value of parks with playgrounds. 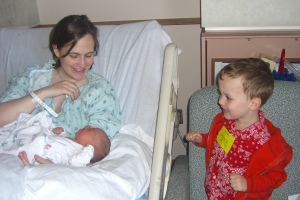 Then we were four.

When our daughter was born, the same thing happened again, although to a lesser degree. We were once again limited by naptimes and although she wasn’t one to cry much, we had to relearn the places that were best for babies. Now that she is three, we have a range of places to take our kids that make sense for our lives. We have adjusted. We go out at least as much as we did before, but to different places and at different times. 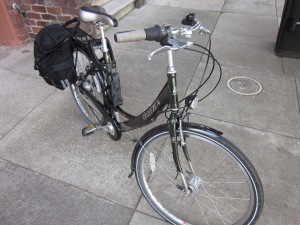 It's a stealth cargo bike.

When we started transitioning to riding our bikes, there was that same sense at first of feeling constrained. The routes we traveled by car were not ideal for riding bikes, and there was this new effort involved in riding with cargo that made everything feel a little harder. I had to learn how to carry groceries on my bike. It took some time (and one disaster) to identify good child seats. We were figuring out everything. But this feeling of life changing in a new-scary-exciting way was familiar. I knew intellectually that it was temporary and that we would adjust.

Every weekday morning, and it never gets old.

Signing up for 30 days of biking pushed me to make some of those adjustments. With a bike ride to fit in every day there was always pressure to go somewhere, and with two careers and two kids there isn’t time to take daily joyrides. I took Amtrak to Sacramento with a bike for a conference. I learned how to strap a pizza to my rear rack with my bungee net (and I got at least three days of rides in by ordering takeout pizza, which is typically a once a month occasion around here). I also learned how to strap a yoga mat to my rear rack with my bungee net and went to a yoga class at a studio I’d never visited before. I found a good bike route to our CSA pickup. I checked out small local grocery stores just a little too far for walking that have no parking for cars but offer generous bike parking—and it turns out that neighborhood shopping by bike is efficient, maybe more so than my usual method of shopping during lunch and carrying everything home after work. I finally raised my seat another inch, and found that I could usually get up hills in a higher gear. I stopped riding my brakes so much on the way back down those hills. I rode to work every weekday that I was in San Francisco, in the new JFK bike lanes, and found that my love for the Conservatory of Flowers has not faded even slightly in all these months. I found out that no amount of riding in stiff headwinds is enough to get used to it. I learned not to order Mexican on 4/20. 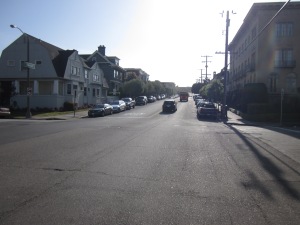 The camera flattens the hill up to work, but it feels flatter now as well.

There are some changes in the works around here. We have a trailer-bike coming for our son from Europe, purchased for a song on German eBay by a friend. There are new bikes to join our current collection. My son and I are signing up again this year for summer Japanese classes, which are offered on the eastern edge of town across the Wiggle. Although I am still intimidated by the prospect of taking our kids along the Oak and Fell arterials at any time of day, I feel ready to try riding that route with him again. 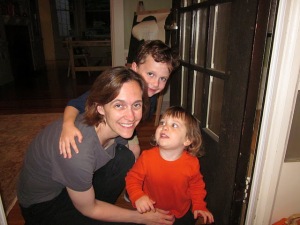 Summer in San Francisco is marked by festivals, marathons and half-marathons, and parties that nearly shut down the city. For some time we’ve reacted either packing ourselves into public transit or staying home to avoid the hundreds of road closures and the crowds. Attending the Pride parade last year sent our kids into a tailspin of exhaustion, although it was awesome. But I learned on Easter weekend that riding our bikes changes everything. This summer we can make it anywhere in the city without getting caught in car traffic or being packed into trains or carrying our tired kids for miles. What I learned in 30 days of biking is that riding our bikes isn’t a constraint at all. Riding our bikes makes us free.

7 responses to “What I learned in 30 days of biking”