SF Pride: another year, another disaster

Breezer and trailer-bike: seemed like a good idea, but it didn’t work out that way.

We have struggled with getting to the SF Pride Parade for years. One year we stupidly tried to drive there: it was a disaster. Last year we tried to take Muni instead: it was also a disaster. The trains are packed, and the route is a long way for kids to stand, and we couldn’t get a return train, so we ended up carrying the kids through the downtown crowds to find an alternate way home. This year I thought I had it figured out: we were going to ride the bike. We were meeting my in-laws downtown: they would watch my daughter while my son and I were in Japanese class, then we’d all walk over post-Dykes on Bikes to watch the parade (the noise of Dykes on Bikes freaks the kids out, and I’m not much of a fan of it either).

With a week’s worth of clothes and books to haul for my son, and his newfound desire to ride, the obvious choice for the trip was the Breezer with Bobike Maxi plus trailer-bike. I loaded up the front basket with my son’s stuff, piled on the kids, and within a block of home, realized that the tires needed a lot more air than they had to handle that kind of load. We turned around and went back. While I was getting the pump, the bike fell over. I’m not sure whether to blame the wheel stabilizer (which isn’t that stable even with the basket unloaded) or the kids for this one, but it turned out to be no ordinary fall.

By the time we hit the Panhandle, the Breezer was making a buzzing noise every time the wheels turned. When we investigated it appeared to be a bent fender. So I tried to whack it back into place with moderate success and we continued on. Everything seemed okay until we got to the Tenderloin, when the gears started grinding and the chain fell off. I don’t enjoy putting the kids on the sidewalk to watch drug deals while I futz with a bike, but I didn’t have a lot of options. Mother of the year! When I got the chain back on, I realized that the damage must have been much more severe than I’d realized—the gears kept grinding and it was hard to shift. But we had little choice at that point: the buses we passed had broken down, and we’d hit the street closures by that point anyway, so there was no other alternative. 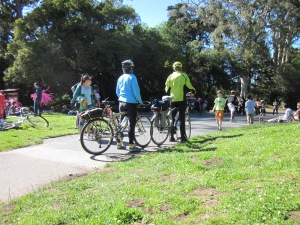 Yet another electric bicycle spotted at Golden Gate Park: I wish I’d had one on Nob Hill.

We finally got to Japanese class (late) and afterward, were all so exhausted that we skipped the parade and went out to lunch. I thought about trying to get home another way, but there were no cabs available around the parade route and transit was much too packed to allow us to board with a bike and a trailer-bike (maybe not even without them). I figured that if I’d made it there I could ride home.

My in-laws told me the parade was now over, so I assumed we could ride down Market Street on the way home, which is mostly flat, sparing my gears. This turned out to be totally not true; the parade just keeps going. So I headed up Nob Hill. About halfway to the top the chain fell off. And fell off. And fell off. I ended up walking up the rest of the hill and back down, figuring that I could manage the downhill Polk Street bike lane. But by the time I got there, the rear wheel had completely seized up. I was in the middle of the Tenderloin with a broken bike and a preschooler who desperately wanted a nap. I needed a cab. 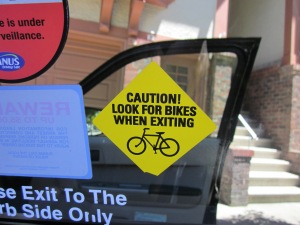 This was a bike-friendly cab: it had the new “don’t door the bicycles” window sticker.

Hailing a cab in the Tenderloin is a challenge under the best of circumstances. Hailing a cab in the Tenderloin during the Pride Parade was harder: every cab that passed was already carrying a fare. I also wanted an SUV cab big enough to haul the Breezer and trailer-bike if possible, because leaving them in the Tenderloin would mean that I’d probably never see them again. Two very nice older gentlemen who’d been hanging out on a stoop helped me, but it still took almost a half hour. I have never been happier to see a car than when an empty SUV cab finally stopped for us. The driver helped us load the bikes and agreed to ignore the fact that my daughter was going to have to ride without a car seat. I have never given anyone a bigger tip. “You’re a long way from home,” he said. “It’s not that far with a working bike,” I said, “But right now, it definitely is.”

I still have no idea what happened to the Breezer (I have an appointment at the bike shop tomorrow). My guess is that whatever it is will be expensive. I am trying not to think about that right now. Sunday made my brush with road rage last week feel like meandering through Golden Gate Park during a street closure. I have never been more miserable or exhausted on a bike ride. And I can’t help feeling disappointed by the Breezer. I worry that our needs for a bike (the ability to haul up to two kids plus cargo) are beyond its capabilities. It’s really a commuter bike and not a family bike. 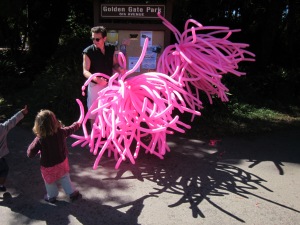 This man was handing out leftover Pride parade balloons to all the kids. Very exciting!

I almost couldn’t bring myself leave home after all of that, but we’d agreed to meet our Big Dummy-riding friends from school for Sunday Skate in the late afternoon.  Once we got there, we had a great time. My daughter loves their youngest daughter, and we ended up riding to a nearby restaurant for dinner. The only downside of the whole evening was that everyone else was out on bikes as well, so the nearest parking was a half-block away. Oh, the humanity.

I sometimes think that the number of bikes I have now is a bit excessive but I’m reconsidering.  If I didn’t have another bike, I wouldn’t have even left the house that afternoon, let alone by bike, and I was glad that I did.

2 responses to “SF Pride: another year, another disaster”