Matt is in China, and that can only mean it’s time for another update of bicycles in Beijing. Last time Matt went to the tourist bicycle center of Beijing and caught some righteous triple tandems. This trip’s theme is practical bicycles spotted on the road. These seem to involve two things: electric assists and passengers.

Bicycle, moving toward a scooter aesthetic

There is a wide range of electric bicycles, and while some of them are primarily for occasional assistance up the hills, in Beijing the bicycle part seems like the afterthought. This bike has pedals, but it’s moving more toward a scooter aesthetic. And those giant batteries have to be sealed lead acid, an environmental disaster.

Going even further along the spectrum is this bike, which looks more like a moped than a bike, although those pedals do seem to turn, I presume for legal reasons. But credit where it’s due: this bike, like the other, can carry a passenger and has a dedicated front basket. These are not the overpowered machines lacking space for even a briefcase that litter San Francisco sidewalks. They’re meant to haul, not to look cute, and I’m guessing they’re a lot cheaper than the Vespas parked next door to us.

Carrying older kids on the bike is okay

And in Beijing, evidently, it’s normal to carry even older kids on the back of the bike. I sometimes regret that our kids will be on our bikes for so long, which reflects the traffic and hills of San Francisco, but I’m beginning to think that this is inevitable for people living in a city that doesn’t have extensive bicycle infrastructure (e.g. Amsterdam, Copenhagen, Tokyo). Sure, it would be better if our kids had more independence, but you have to work with what you’ve got. 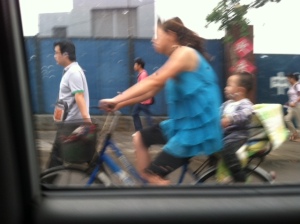 Riding with a baby in traffic

These moms make me think that the fears of riding in traffic are relative. I’ve gotten more confident riding in city traffic here, but riding in Beijing would probably give me a heart attack. And parents from smaller cities would probably have heart attacks here. We get used to the circumstances around us. It’s not like kids have never died in cars. 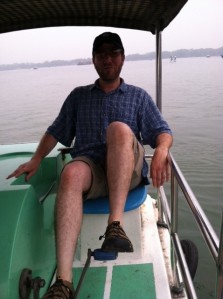 Pedaling a paddleboat is a kind of pedaling.

Matt still has yet to ride a bicycle in Beijing. But at least this time he’s pedaling.

2 responses to “More bicycles in Beijing”