The costs of living without a car

In brief: they are significantly less than living with one. 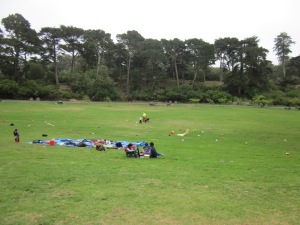 We don’t even need to park the bike at our son’s summer camp. Matt just rides into the middle of the field to pick him up. The other kids were so jealous.

I wrote earlier about the monthly costs of keeping our minivan ($400-$600/month), but I realized I forgot one expense: parking. Parking for one car is included in our rent at home, and although the market value of that space is ~$250/month, we’re not allowed to rent it if we don’t use it so it’s a wash. But whenever we drove the minivan anywhere else, we almost always had to pay to park. Our weekday driving primarily came when Matt drove to work because he was going out of the city for business. However, even though he’s not normally a car commuter, if he stopped at the office before or after, paying for parking was his responsibility. Because hey, it was just his normal commute, right? The same was true for me. The cost of parking where we work is $15-$20 per day. It worked out to between $50-$100 per month, conservatively. Plus on the weekends we had to feed meters. So the cost of owning the car was really somewhere between $450-$700/month, depending on how much we drove. It shocks me just writing those numbers. And we owned the minivan outright, so no car payments in that calculation. (If you ignore depreciation and only count actual out-of-pocket expenses it was still $250-$500/month.) 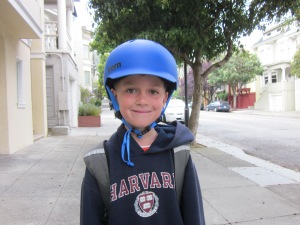 A portion of our newfound savings, admittedly, went to a new helmet.

This is still better than when we were car commuting and paying $140/month for a campus parking permit on top of the occasional downtown parking. My god, that car was expensive! No wonder Uber is making a killing in San Francisco. I could take daily limo rides without running up a $600-$850 monthly tab (or $400-$650 ignoring depreciation again).

Anyway, now that Matt has to rent a car for his business trips, the company pays for parking the rental car at the office, because he obviously wouldn’t be driving a rental car on his regular commute. Ha. Ha ha. 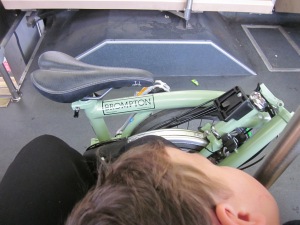 My son, passed out on my lap on Muni. (The Brompton continues to reign supreme in practicality; there was only space on the bus bike rack for one more bike–my son’s.)

In this first car-free month I was curious how much alternative transportation would cost us. It was a weird month. Matt had a series of meetings in the South Bay, so got a rental car for one week through work. By coincidence that was the same week that his mother went in for brain surgery in Redwood City, so there was a lot of extra driving to see her on top of those meetings. And we took a long BART ride one weekend to visit her in Berkeley after she went home. What can I say? We worry. We had planned to rent a car (and will next time we go; the round trip on BART is 4+ hours) but the San Francisco Marathon shut down the city. The MinUte went back to the bike shop while the N-Judah line was under construction, so we tried out ride sharing one weekend. And our son had a week of bike camp across town when Matt was away, which given the need to carry his bike implied a couple of trips using car share as well–we tried it once on Muni but (a) it’s so slow that we were late and the camp called us wondering where he was and (b) he was exhausted all day after riding over from the bus stop. And then the mamachari died. 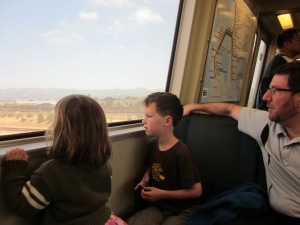 Coming out of the tunnel on BART

I realize that every month is unique in its own way, but ironically, we drove more in July without a car than in any of the previous three months when we actually owned one. However no one else we know has brain surgery plans and the N-Judah is back in business, so this was probably an expensive month by the standards of car-free life, although having our bike collection radically thinned isn’t helping. Overall I hope that the next few months are much less exciting regardless of cost. (Matt’s mom is fine, by the way, although her surgery would have been better timed around Halloween, when she could have gotten some serious mileage out of the staples ringing her scalp. Oh well, hindsight.)

So our transportation costs for the month (rounded up to whole numbers):

The total damage (for a very heavy month of auto  travel by our  standards even without the rental car through work): $116. Seriously? And we actually drove more than usual? Well hello, college savings. Even if we didn’t own bikes and took car share, ride share and Muni everywhere, we’d still save money by not owning a car. I am still sideswiped by disbelief. No pun intended.

4 responses to “The costs of living without a car”