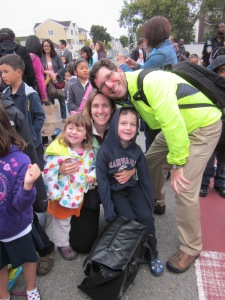 On the first day of school our son asked to go by bike.

We have not been involved with family biking that long. One could argue that we make up for lost time with intensity. We have no car anymore, and we ride somewhere pretty much every day, although I know myself too well to track days or mileage, because that would inevitably lead to compulsion and madness. I learned that the hard way when my employer was handing out free pedometers. The day mine broke snapped me out of an obsession that had had me pacing around our bedroom at 11:59pm every night to break my steps record from each previous day.

Because I don’t track miles and I’m not riding a bike to get in shape, I am enjoying myself and so is everyone else. I realized that the other day when my kids found some old packing paper, spread it out into a makeshift course in the living room, and started racing each other using a ride-on hot wheels truck and a ride-on bumblebee. They called out, “I’m winning!” “No, I’m beating YOU! I turned on my electric assist!” “I’m pedaling faster than you!”

Our default rental car is now this plug-in hybrid (City Carshare is offering these at their lowest rate).

We have been in cars a lot in the last month: rides to the airport, rides to the train station, a week at my mom’s, a trip to Marin. We rented a car last week for one of our more intensive grocery runs, which involved refilling a gallon jug of olive oil and serious inroads into the bulk food bins. Altogether it’s worked to out about a dozen car days this month (although those were mostly clumped together while traveling, and astonishingly, all of them together still cost less than the lowest monthly tab of owning the minivan). This is apparently not enough driving to dislodge my kids’ new self-perception that riding a bike is what’s normal. On our trip to Marin, my daughter asked me whether it was possible to buy a car with electric assist that would make it go faster. I said that’s not really how electric cars work, and suggested that cars went fast enough already, but she remained unimpressed.

Although I’m not opposed to using a car occasionally, pretty obviously, not owning one has been liberating. When we drive I remember that being in a car kind of sucks: hello traffic, parking, and road rage. I definitely appreciate the increased range and time-savings over long distances (we won’t take BART to visit my in-laws again, it takes twice as long and is almost as expensive as renting a car), but altogether I’d rather be doing something else. My daughter’s preschool is closed this week, so on Monday we rode down to the Academy of Sciences, parked the bike at the (empty) rack by the front door, and walked right in. Watching other parents struggle out of their cars several blocks away or the subterranean parking lot, I thought, “I’m glad we’re not doing that anymore.” 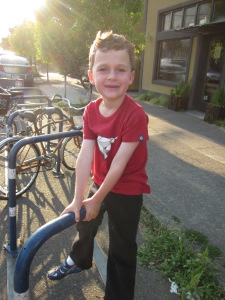 Kids on bike racks: it never gets old.

But that’s just me. Our kids get to live this way because it makes our lives easier, not because they chose it, although they were the inspiration. My kids are simpatico with our vegetarianism (which I realize is hopelessly retro of us in this brave new world of “primal” eating). I wondered if they would resist life without a car. We don’t spend much time talking about more general reasons we might want to reduce driving, as our daughter is three and our son worries way too much about doing the right thing already. We do our thing, and we told them we will rent a car whenever they want. And it turns out that’s fine with them. They like riding the bike and taking the bus and walking; it means we can pay more attention to them.

I have these occasional terrifying moments as a parent when I realize that literally everything we do defines our children’s understanding of what is normal. We view life as easier and better not that we drive (much) less and so do they. I like that our transportation choices are now more closely aligned with other things we want in our lives: quieter streets, cleaner air, and streets designed for people. And we are not totally unaware of the environmental implications. Without getting too deeply into our world views here, we have a compost bin and we’ve been known to use it. 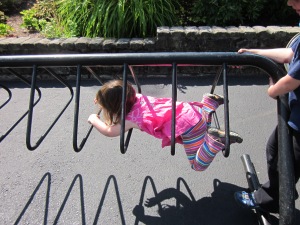 She came up with this all by herself, before I had the chance to show her Loop Frame Love, who pioneered the bike rack tunnel.

(A shout-out goes to the infinitely readable Davey Oil for inspiring some of these thoughts.)