You cannot run faster than a Bullitt

This weekend, the Bullitt arrived. We immediately took it out for an 11 mile ride with the kids. Here’s what I’ve learned.

On the way back home, on the Panhandle, we spotted: another Bullitt! That was unexpected. It was a milk-white Bullitt (unassisted) with a kid box like mine, but the rider was carrying a big black dog. Given that there are no Bullitt dealers in San Francisco, we were both nonplussed. “Nice bike!” I said. “Yay, BULLITT!” he said. Based on his accent, I think he was Danish. The other riders on the path looked dumbfounded.

On Saturday night before the Bullitt arrived, we had to do a longer-distance errand at night with both kids, and given the distance and the fact that it was dark and our lack-of-a-two-kid-cargo-bike situation, we rented a Nissan Leaf from City Carshare for a little while. We were stuck in traffic for most of the trip. We couldn’t find parking. The kids got fussy. Matt and I were both struck by the fact that we used to do this EVERY SINGLE DAY. We were relieved to return that car. “Okay, that sucked,” said Matt. 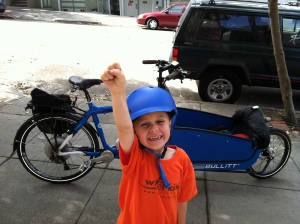 In light of this experience, I hesitate to call the Bullitt a car replacement, although that is arguably the closest equivalent. But the Bullitt is better. Within city limits, it is faster than a car, because it doesn’t get stuck in traffic. With rare exceptions, it can carry more than a car. It can park by the front door of any destination. Our kids enjoy the ride. It turns out we weren’t looking for a car replacement. What we wanted all along was a totally awesome cargo bike.

7 responses to “You cannot run faster than a Bullitt”