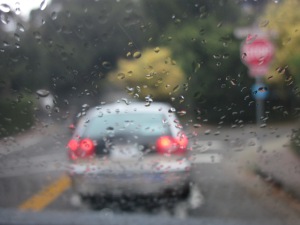 Our vision through the windshield: impaired

We sold our car about four months ago. Since then I have noticed two major changes in our lives. First, we have more money at the end of every month, which makes sense to me. Second, we now generate less weekly garbage, which I still don’t understand.

The more money thing is pretty nice. It is still new, and makes a happy little surprise at the end of the month. Where did all this money come from? Oh yeah.

Why yes, we can go out for ice cream again.

Given that we were already riding bikes and transit most of the time, transferring the remaining car trips into City Carshare rentals came with no real inconvenience. Sure, sometimes it would be easier to pick up a car downstairs in our garage than from the nearest car share pod. But it was much more hassle to figure out what to do with a car we owned at the end of every trip (Does it need gas? Do I have to pay for parking at work? Did someone hit it?) than it is now to just drop a car back in its pod. Plus, any car picked up at a university pod comes with a university parking pass. The other week I had to put gas in a City Carshare rental. It was the first time I’d been to a gas station in at least six months. “Wow,” I thought idly as I pulled in, “gas is $4.80/gallon now? Well, I don’t have to pay for it.” Then when I pulled out, someone nearly hit the car. “That would be a bummer,” I thought, “but City Carshare would pick me up.”

It was all very relaxing. With the cargo bike now in action, I suspect our car rentals will be even less common in the future, however.

How does a bike that can carry anything generate less trash?

I’m still mystified by why we generate less garbage. Back when our daughter was in diapers, our garbage can was full every week. After she joined the land of the toileted the can was usually about half full. However in the last few months it’s never been more than a quarter full. I might not have even noticed this if I Bike U Bike hadn’t mentioned the same thing, at which point I thought: huh. The recycling also dropped a little, at least until the last few weeks, when we’ve been blanketed with election-related flyers, which is thankfully temporary. There is slightly more compost.

I can’t figure out what changed. Why do we produce less garbage? But I suppose I don’t need to know the reason. The landfill is happy no matter what.