Don’t you worry that it’s not safe to ride a bike with your kids? 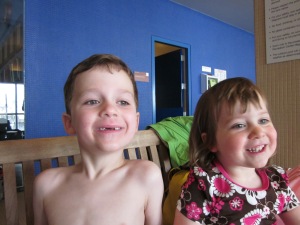 Not trying to kill each other

Before we had our son, people tried to explain what it was like to have kids. It was impossible. They said it was like having your heart walking around outside your body. It’s not like that for me.

When I think about my children, I think about falling in love. You fall in love, and everything is passion. It’s like being cast in your own personal opera. Everything your beloved does is beautiful. Every fight is world-ending. It seems like the feeling will never end. But it does end. You get used to one another, and life fades into normalcy. You fight about the dishes and the world doesn’t stop turning. You settle down. 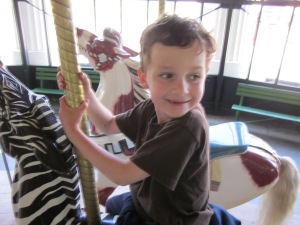 My son has ridden the Golden Gate Park carrousel since he was a year old.

When my son was born I fell in love the moment I first saw him. A minute before we’d been told he was dying. My daughter’s birth was the same thing all over again. I have two children because I couldn’t stop with just one. I have two children because that’s as much as I could bear. And for me, what’s different about loving my children is that I’ve never gotten used to them. It’s still passion. Everything they do is beautiful. Every fight makes me want to kill them. 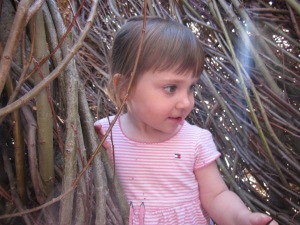 Exploring the living maze at the Bay Area Discovery Museum

They insist that I sleep with them, and I’m worrying about that paper that absolutely must be finished tonight, and I try to get up and get back to the computer and they grab my hands and their palms are sweating. “I love you infinity, Mommy!” they whisper urgently.  “Don’t go!” And I stay.

I am across the room and they are fighting and I see where it is going but before I can get to them one is bleeding and the other is shrieking, “I didn’t do it!” and the world goes black, in that moment I am literally blinded by terror and rage.

It’s been almost seven years now. I haven’t gotten used to it. How could I? Every day they are different people. Every day I fall in love with them again. My heart isn’t walking around outside my body. My heart is right here in my chest, clenched tight as a fist. 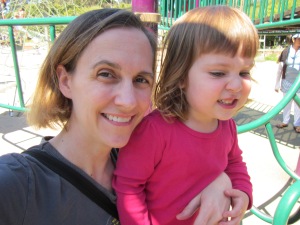 Rest assured that my daughter was trying to jump off something when this picture was taken.

Do I worry about my kids? Sure. My daughter, who has never seen a vertical surface she didn’t want to scale and jump off, has been to the emergency department so many times that I have seriously considered making her one of those flip charts like they have at nuclear power plants: “It’s been X days without an accident!” (Fun fact: Matt and I took a tour of a nuclear power plant together, the first month we met.) Make it ten days in a row and you can have an ice cream cone, kiddo. Every photo taken of her at preschool is in motion. My son’s innate cautiousness used to worry me as well. I should be careful what I wish for. 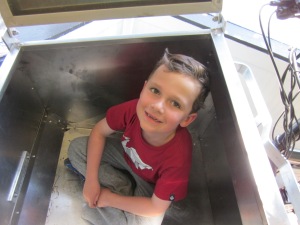 Learning from his sister, my son locked himself inside the delivery box of a Bullitt.

Do I worry that it’s not safe to ride a bike with my kids? Well, there have been moments, but not really. There are always moments, on or off the bike. When I walked down the street with my son as a toddler he was fascinated with everything. He would run into the street when he saw something exciting—letters on a sewer plate, a shiny bottle cap. (Why are streets so dangerous that kids can’t make mistakes? Only drivers get to make mistakes?) I remember driving in a rental car on a suburban strip when my daughter figured out how to open her door, and so she did, right into traffic as we were moving and we screamed, and she screamed because we were screaming, and we tried to move over to the side of the road and get the damned door shut, and then we sat there in the stopped car, panting, wondering if we’d ever drive again. 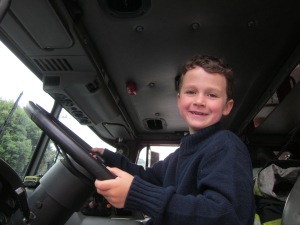 Sitting in fire trucks is fun, but my kids have little interest in ordinary cars.

I don’t feel particularly threatened by city traffic on our bikes. People fear riding bikes because it’s unfamiliar, not because they’ve reviewed the evidence. Taken as a whole, public health research makes a strong argument for getting out of the car by any means necessary. And we are enjoying the ride. I don’t snap in frustration at my kids as I circle the streets endlessly, praying my son won’t get a tardy slip today because it’s street cleaning day and there is nowhere to park the damned car, there’s never parking in the city. I don’t get stuck in traffic and rack up late pickup fees as my daughter wonders why today she’s the very last one to be picked up at preschool. I don’t have to decompress from a stressful commute when we get home. 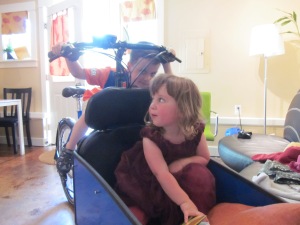 Can we take the Bullitt?

9 responses to “Don’t you worry that it’s not safe to ride a bike with your kids?”