Spotted in the Financial District: this is probably the Bullitt we should have gotten.

My son was four years old when the San Francisco Giants won the 2010 World Series. It was nothing that we had expected; at the time, their last World Series win had been in 1954. We like baseball as much as the next red-blooded American, but hadn’t given it a lot of attention except as a reason to take our son to the stadium on summer afternoons.

Everything changed that night in 2010. When the Giants won the Series, the city exploded. In San Francisco, a team of outcasts and misfits winning the World Series felt like more than a sports title. People swarmed out into the streets even up where we live. There were fireworks and car horns blasting all night.

Our son is almost seven now, old enough to watch the 2012 series and understand what was happening. Tearing him away from the games to eat dinner led to tantrums.

Last night as I was putting my daughter to bed, the fireworks and screaming began again. It didn’t wake her. But we knew the Giants had won the World Series again. I’m not usually a fan of car horns, but I didn’t mind them blasting last night. Our son will be a Giants fan forever. 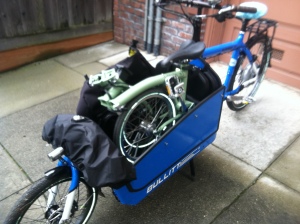 So many ways to use a cargo bike

The Bullitt has been sporting a black balloon all weekend.  It may not come equipped with a celebratory horn, but it’s still fun. Last week I had to drop it off and travel on. So I stuck the Brompton in the box for the transition. Bike on bike: hotness!

6 responses to “When car horns make a joyful noise”