You can’t win them all: 2012 Holiday Lights Ride

Last night we headed out on for the 2012 San Francisco Bicycle Coalition Holiday Lights Ride. We loved this ride in 2011. And we were feeling pretty good, as we were lighted up like Christmas trees. Literally. We’d picked up some light strings at Ikea on the way back from a Hanukkah party for $2 apiece. We’re hard to miss these days. 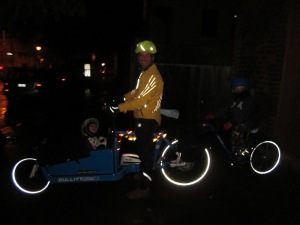 For the first time, we also set up the Bullitt with the Roland add+bike trailer bike. We may be one less minivan, but with that setup we’re almost as long as a minivan. But our son was really excited that he’d get to pedal on this ride without risking falling behind. He has complained about boredom when he’s riding as a passenger.  Our daughter was thrilled that she’d have room as the sole occupant of the box to stretch out and take a nap. 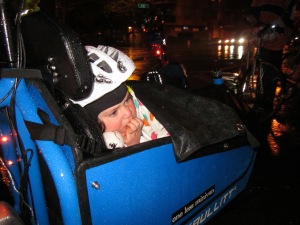 Even with our efforts to pack her in under a rain skirt, our preschooler was not enjoying this ride on the Bullitt.

When we rolled outside, however, we realized that in the time it took to set up the kids and the bikes, it had started raining hard. Even with excellent rain gear, having rain driving into our faces was making us and the kids miserable. We headed over to the Panhandle statue anyway, figuring that we’d at least get a brief trip on the trailer-bike in for fun. Astonishingly, the ride was not called for rain. However instead of the hundreds of riders who’d showed up last year, there were maybe a dozen people. 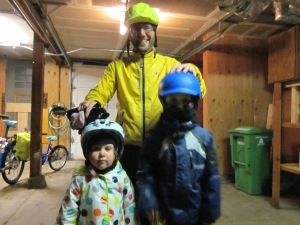 American Gothic, in which the bedraggled riders decide discretion is the better part of valor and slosh home.

We didn’t make it far on that ride. Our son had rain pants, but had decided against boots, and although he was really enjoying pedaling he complained that his shoes were filled with water. We weren’t doing much better. When the ride headed into Golden Gate Park, we headed back up the hill toward home. We dried them off and took them out for udon noodles across the street as an apology. By then it had mostly stopped raining. Better luck next year. 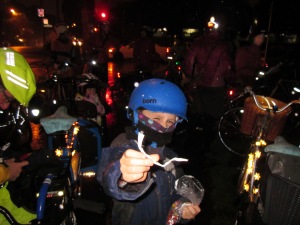 Our son was actually so thrilled to be on the Roland trailer-bike he was willing to gut it out longer than anyone.