What we did on our winter vacation

There were enough other people at Muir Woods on Christmas Eve to get a family picture.

There are some things we do every year over winter break. The main one is to go to Muir Woods on Christmas Eve. We rented all-electric Leaf this year (the trip up and down the mountainside is sobering even with the help of a motor) and had the unnerving experience of watching the “miles remaining” gauge tick away rapidly as the car grunted up the hills. Then we earned them all back as we coasted back down. This year half the road had washed out, and there were temporary stop signs where passing cars had to take turns, because one lane had crumbled away and dropped into the forest below. When we got to Muir Woods some of the trails were blocked by fallen trees due to all of the rain. But anything that discourages visitors is good from our perspective, and as usual it was quiet and peaceful, as long as listening to our kids yell, “Where are the beavers?!? Can I climb that stump?!?” fits your definition of peaceful.

It turns out that reindeer hate rain. Who knew? (at the California Academy of Sciences)

It would be an understatement to say that it rained the first week of our vacation. It poured. Trees fell over, and garbage cans rolled down the street. Astonishingly, our basement did not flood. When the kids got stir-crazy enough we finally packed them up and headed to the California Academy of Sciences, the closest indoor attraction to home. And thank goodness we sprung for the Bullitt rain cover last month. Matt rode the kids right up to the front door and dropped them off, and picked them up at the end of our visit the same way. We were soaked but they were completely dry. They could easily have done the whole trip in slippers. As we rode through the park, watching the wind make actual waves in the streets filled with rain and people walking back to their cars struggle to keep their umbrellas right side out, while our kids sung songs obliviously, we felt like parents of the year. 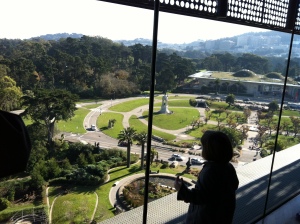 Our kids mostly ignored the view from the tower of the de Young museum.

Eventually it stopped raining but it stayed cold. Happily the cover handles that as well. We packed up the kids for trips to the Children’s Creativity Museum, the Japanese Tea Garden, the de Young museum, and parks, and most of the time they refused to even put on a sweater. At the same time, I was wearing two pairs of socks, two pairs of gloves, and long underwear, and shivering. Matt had initially had second thoughts about getting a box bike rather than a longtail, but after the last two weeks, we’re both really glad we got the kind of bike that comes with a kid-cover. 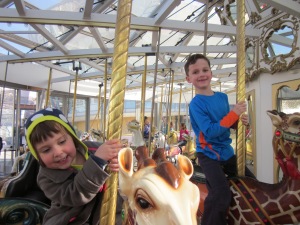 The Children’s Creativity Museum has its own carrousel.

It can be hard to get on the bike when it gets cold. These days, however, because we don’t have a car sitting in the garage, if we want to go anywhere we’re going to get cold and/or wet no matter what. Most of the time, unless we’re leaving the city altogether, it’s easier to get on the bikes than to hike over to a car share pod. And we’re always glad when we ride. Matt and I took several trips downtown and beyond, beyond our usual stomping grounds, and it was good to be moving. Especially after a few days trapped indoors, even riding in a downpour so thick it’s impossible to see a block ahead seems appealing. At least, it does now that I have decent rain pants. 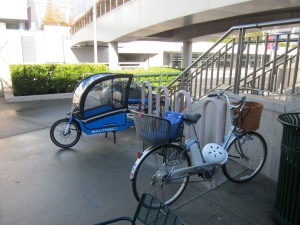 Check it out: we’re all trend-setting and stuff.

We saw many more bikes on the road this year than we did the same time last year. But the biggest change was the massive increase in assisted bikes we’ve seen. I used to snap photos when I saw an electric assist in San Francisco. Now that I see at least one every day, even on the hills near home, it hardly seems worth the effort. We went electric in 2012, but for once it seems as though we were cutting edge. If we saw is any hint, it’s 2013 that will be the year of the electric assist.

4 responses to “What we did on our winter vacation”