The racks get crowded even at 4pm, way before the pickup rush.

Bike parking throughout San Francisco is getting pretty crowded, especially compared to last year, and I can’t imagine how bad it’s going to get when the weather gets better. Sometimes I have to park the bike as far as a block away, which is trivial by comparison to how far we used to have to park our car, back in the driving days. But it annoys me even so because bike parking is easy and cheap to install (and also because I have become hopelessly lazy about walking).

There is plenty of space to install more of the terrible racks they have (kind of a worst-best alternative) but they haven’t even done this.

But there is bad bike parking and there is terrible bike parking, and the worst bike parking by far on my daily rounds is at my son’s after school program at the Jewish Community Center of San Francisco. It is the worst because it is a half-hearted attempt to put in bike parking that was horrifically slipshod, and it is the worst because despite multiple complaints from me and others in person, and in writing, plus a dedicated meeting I had with a building manager about it, they have done absolutely nothing to fix it. In Matt’s most recent discussion with the building staff yesterday afternoon, they said they weren’t planning to do anything about it either, because “we need that space for drop offs and pickups by car.” 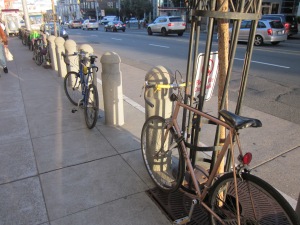 These tree cages aren’t even attached to anything, but there aren’t any better alternatives.

The bike racks are pretty standard U-loops along the sidewalk. However they were installed smack up against bollards placed on the sidewalk, so it is only possible to use one side of the rack, because the bollards keep a bike from getting close enough to the other side. There are only a few racks, so given how many people arrive by bike, there are never enough spaces and people end up parking bikes to the cages protecting the trees. And there’s still not enough space. Even worse, the racks are so close-packed against other obstacles built into the street that it is virtually impossible to park a cargo bike there unless you get the one rack that isn’t smack against a bollard that allows for a bike wider than a fixie. The JCCSF at 5pm has bikes piled up outside with child seats, cargo bikes, and trailer-bikes, all ridden by parents like me who have chosen to ride with their kids instead of drive. Yet parking a bike outside the JCC is so difficult that trying to pick up my son on the Bullitt sends me into a fury every evening that I try it. I would retreat to a meter but there are no meters in the huge drop-off/pickup/bus zone outside the building.

By contrast, the after school program gives every family two cards to put in the car(s), whether you drive or not, that allow you to park a car for free for 15 minutes in their underground garage to pick up kids. They have a carefully orchestrated car pickup zone at the end of the day, complete with walkie-talkies, to make sure that parents who drive barely have to slow down to pick up their kids. Yet this pickup is so notorious for road rage that I get emails from the director of the after school program asking driving parents to please chill out and act like adults.

The JCCSF pays lip service to active transportation, like everyone else, but their bike racks tell the real story. I pick up my son there by bike because I go everywhere by bike, although I’m astonished that anyone else does. Yet they do. And given that there is such unmet demand, imagine how much less space they’d “need for drop offs and pickups by car” if they had some decent bike racks.

[Thank you, internet! We’d been asking JCCSF to install new bike racks for months, and were being blown off as recently as the day before I wrote this post. After posting, I got an email that very evening saying that they’ll be installing 6 new custom bike racks that will hold 12 bikes. In addition, they’re going to try letting parents have keycode access to a locked courtyard with an additional bike rack for preschool and after school drop-offs and pickups. We are thrilled! I know that some readers wrote to to JCCSF on our behalf and it is very much appreciated.]