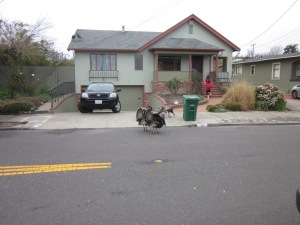 This is what you get when you go to Berkeley: wild turkeys. It’s not safe crossing the Bay.

I’ve been disappointed for years now that San Francisco has no family/cargo bike shop. Things are certainly better than they were a couple of years ago, when we started looking for our 2-kid hauler, but shopping around for a family bike in the city still involves a lot of “around”: wandering from bike shop to bike shop, none of which are necessarily on the same transit lines (and none of which, pretty understandably, have any parking for cars.)

Back in 2012, it was a no-brainer to tack a train ride to Portland for cargo bike shopping onto our summer trip to Seattle to visit my mom. At the time Portland had three cargo bike shops that seriously considered the needs of family riders. Last year, however, I started to hear from other families about Blue Heron Bikes in Berkeley, which opened shortly after we returned from Portland in 2012. They said it was a real family bike shop. They were right.

These people think of everything.

We didn’t make it over to Blue Heron until early 2014, but it was worth the wait. Having visited a few family bike shops already, we knew what to look for: kids’ bikes, cargo bikes, and a Lego table. Check, check, and check.  (Clever Cycles in Portland, which represents the pinnacle of family bike shops in the United States, also adds a large play space, inexpensive rentals of many of the bikes it sells, and FREE DIAPERS IN THE BATHROOM to that mix, but this is the result of years of practice.)

I no longer patronize bike shops that give me attitude—and anyone who’s walked into a typical bike shop with kids will know what I’m talking about here—so the other critical attribute of a family bike shop is being nice to anyone who walks in the door.  I’m no longer the best judge of that personally, given that my husband likes to walk into bike shops and announce, “This is my wife and she writes a blog about family biking!” However on our first visit to Blue Heron about half a dozen novice family bikers stopped by, and Rob (the owner) and his staff were lovely to all of them. Those poor families also had to endure us talking their ears off about the bikes they test-rode, but you can’t blame Blue Heron for that. Check Yelp for the many five-star reviews from people who showed up on other days. 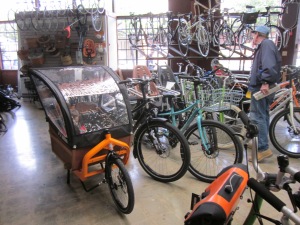 What kind of bikes can you get at Blue Heron? Lots of bikes: they stock Bromptons, Bullitts (sent down from Splendid Cycles), EdgeRunners, and Yuba Mundos. I’ll admit that Bromptons aren’t usually considered family bikes, but that’s how we ride ours, and Emily Finch is now hauling four kids on a Brompton + Burley Travoy, so I think they qualify. Blue Heron also has some quirky stuff like a Japanese cargo bike that they’ve rigged with a rear child seat.  I haven’t ridden that bike, because I figured we’ve tried their patience enough. My kids wanted to ride all the bikes they had in front, and my son announced afterward that he wants a mountain bike. My daughter cried all the way home about our decision to not buy her the purple bike she rode while we were there, because “It’s near my birthday!”

The kids did not stop with the bikes in their own size. They also asked to ride the Bullitt with the large box, so we did, and I haven’t stopped hearing about how we should upgrade to that box since. And they also wanted to ride the EdgeRunner. The last EdgeRunner I had ridden was a pre-production model, but the 2014 EdgeRunner was significantly more awesome. We loved that bike. I haven’t stopped hearing about how we should get an EdgeRunner either. We’re going to try the assisted version next, and hopefully a Kinn Flyer and a Workcycles Fr8 too (more reviews!)

Although Blue Heron is located on the Ohlone Greenway in the flats, which makes for lovely test rides, Berkeley is not without hills, and they will also assist your family bike. They had BionX versions of a number of the cargo bikes they sell ready for test rides. Fortunately they didn’t have a BionX EdgeRunner in stock when we were there or we might not have escaped without buying another bike. 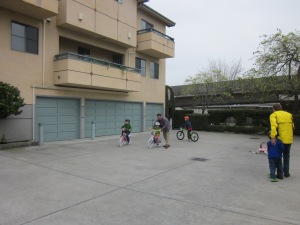 From my perspective, Blue Heron has only one dreadful, depressing flaw, and that is that it is in Berkeley. Getting to Berkeley is an all-day commitment for us, even now that our kids are older. However I understand why families in San Francisco are making the trek across the Bay. Getting a cargo bike from Berkeley to San Francisco is a real adventure—one dad took his new Bullitt on BART, which meant carrying it on the stairs, and another family rode theirs down to the ferry to get it home.  I’m not sure I’m ready to commit to that kind of adventure, but we’ve been there twice now and I have no doubt that we’ll return.

For us, a trip to Portland was the only way to compare the different possible bikes we could have bought. We wouldn’t have to make that same trip now. I’m glad we did go, of course, because if we hadn’t we would never had met the family biking crew in Portland, and we would have had to wait much longer to ride our bike. This is difficult and unpleasant to imagine. But if we were looking now, we’d start in Berkeley.