We tried it: Xtracycle EdgeRunner (assisted and unassisted)

Test riding the stoked EdgeRunner in Seattle. Thanks to Davey Oil for the chance to ride, and Madi Carlson for the great photo!

In 2012 I rode the prototype EdgeRunner. It was a hard bike to review because it wasn’t really in production yet, so a lot of the specifics were unsettled. I liked it, but that review does a lot of blah-blah talking about longtail history as a result of my uncertainty about the ultimate production model.

Since then I’ve had the chance to ride real EdgeRunners, both unassisted (at Blue Heron Bikes) and assisted (both stoked and BionX, at G&O Family Cyclery). These are much easier to review, although I suspect my reviews will always be long reviews (not to mention they’re all my personal opinions and other informed observers may differ, YMMV, etc.) For those with shorter attention spans, here is the 6-word summary I’ve promised for all reviews going forward.

EdgeRunner: Best longtail ever. No contest.

I’ve mentioned before that my first impression of the EdgeRunner, when it was just a picture on the Xtracycle home page, was: “Wow, that is one ugly bike.” Let me officially eat crow: in person, the EdgeRunner is lovely. And it is awesome to ride.

Overall, these are not big complaints, and there are kludges or fixes for the things that bother me. For our kind of riding, the EdgeRunner is a category-killer in the longtail class. 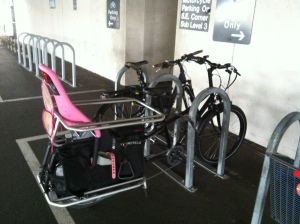 Seriously, these bikes are all over San Francisco now.

Would we buy an EdgeRunner? Will we? Well. Maybe?

My poor mamachari is essentially stroking out at this point. It was old and rickety before it got run over, and yesterday its power cord was crushed by the construction workers fixing the rotted wood in our garage. We had expected that the mamachari would be our second cargo bike until both kids were riding on their own bikes, but now I’m not so sure. And as much as we love the Bullitt, it would be far more practical to have a longtail and a front-loader than to have two front-loaders. So let’s say this is a question we’ve begun discussing seriously.

So I’m very glad that the EdgeRunner is available now, because if we do buy a longtail, the decision of which one to buy has become very simple indeed. There are reasons to buy other longtail bikes—the Mundo can carry extreme loads, and the Big Dummy can be more useful in certain conditions—but for the purpose of hauling kids around town, we found the EdgeRunner unbeatable.

29 responses to “We tried it: Xtracycle EdgeRunner (assisted and unassisted)”