A new bike in our fleet 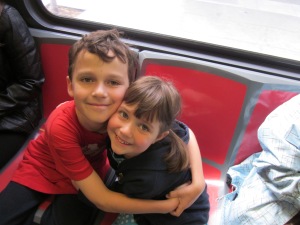 Summer is winding up, and it’s been fun. We’re having too much fun for me to write regular blog posts, anyway. I missed taking any vacation last summer, so this summer I’ve gobbled up three weeks in a row. We have been to Portland to Fiets of Parenthood, to Oakland for PedalFest, and to a different museum every day that we’ve been in San Francisco. On Saturday we are heading out of range of all electronics, except an archaic pay phone, to spend a week at San Francisco’s Camp Mather.

In honor of this upcoming trip, we finally bought our daughter a pedal bike. Kids at Camp Mather ride their bikes everywhere. She’s been old enough to ride on her own for a while, but I was frustrated by the difficulty of finding a 14” or 16” kid bike without coaster brakes. Coaster brakes delayed our son’s ability to stop on his own for months (Hand or feet? Hand or feet?) And I have heard enough horror stories about kids’ feet being caught in the cranks to last me a lifetime. She was getting big for the balance bike but we held out because we didn’t want her to hate riding. Our son, back in the day, tried to retreat back to the Hotwalk several times in frustration. He only really settled into riding on his own when we finally upgraded him from the Laser. 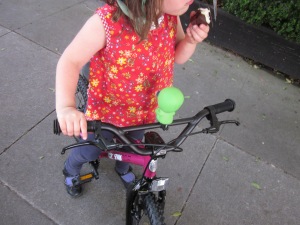 Check out those handlebars: front and rear brake! She can stop while eating a cupcake.

We finally found the right bike. Her new 16” bike has both a front and rear brake, but no coaster brakes, and it weighs 15 pounds. Our daughter got on it for the first time two weeks ago Friday and mastered riding it, as well as stopping on a dime, in less than 15 minutes. But she still couldn’t start on her own. So the next day we took her to Golden Gate Park for an hour, and she picked up the bike and rode on her own all the way back home. Sometimes she spins the pedals backwards for a bit starting up but it doesn’t stop her, obviously. Both kids have been tearing up the sidewalks around the neighborhood ever since. Last weekend she learned to ride moderate hills, feathering the brakes gently on the way down. Matt and I keep high-fiving each other for holding out for a bike without coaster brakes. I’ve been so busy following the kids around that I’ve barely had the chance to get on my own bike (adults are not allowed to ride on the sidewalk in San Francisco). The balance bike is dead to her.

I’ve focused mostly on cargo bikes but it’s probably time to write about the kids’ bikes as well. After we get back from Camp Mather, that is.

6 responses to “A new bike in our fleet”