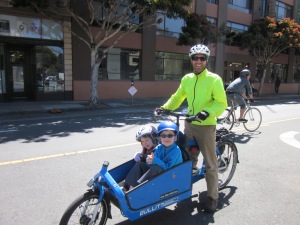 We arrive at Sunday Streets. No more cover; it’s spring in San Francisco.

Last weekend we went to Sunday Streets again, and it was even more crowded than last year. Except right at the start, I think that the Mission site is so popular that walking the bike is no longer optional but required. It was still fun, however, with a caveat.

We went planning to meet another Bullitt family. Instead we met two! Even more amazing, although both rode red Bullitts, neither one of them was the one I recently spotted at our son’s after-school program (I asked). 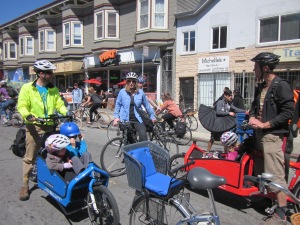 This was the first red Bullitt.

We were late to Dynamo Donuts because we got caught in all the street traffic, which is okay, because halfway there we spotted our first red Bullitt. What’s more, it was another Bullitt from Splendid Cycles! (Matt has been complaining that we need a bigger Splendid sticker on our bike because people keep stopping him to ask where we got it. The little sticker under the seat is easy enough to spot if you know where to look, and of course I do, but strangers on the street, not so much.) It was great to meet this family. 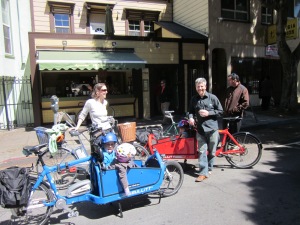 I am getting the skinny about Bullitt #2.

When we got to Dynamo we met Jim, as planned, with his red Bullitt, plus an Xtracycle (formerly assisted, before the battery died), a Kona Ute, and eventually a music trike. For all the attention that one Bullitt gets, it pales in comparison to the attention that two Bullitts get. This red Bullitt came from Blue Heron in Berkeley, and to my astonishment he got it back to San Francisco on BART, by standing it on end in the elevators. I’m still impressed by this story. 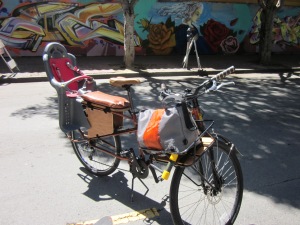 A Kona Ute set up for kids

Unfortunately by this time Matt, who had ridden the Bullitt because this trip would be his only riding for two weeks thanks to all his business travel, noticed that the front cranks, which had failed once before, were starting to creak again. By the time we navigated back to Mission, they stopped working almost entirely. Matt had to use the throttle on the BionX to get the bike home. Using the assist this way drains the battery fast, but we were lucky to have it. Now the Bullitt is back in the shop. Sigh. And I have to figure out a way to get both kids to their respective schools without a two-kid bike while Matt is away. 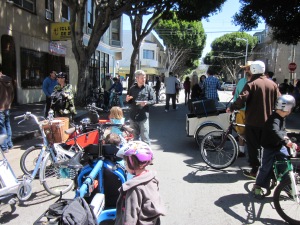 This left me with two kids to get home solo. I crossed my fingers, loaded my daughter in the front basket (which is not rated for that kind of load, nor is it a comfortable way for her to ride) and rode home with them very, very carefully. The good news is that we made it.

And the other good news is that Mission Sunday Streets is pretty cool. Our kids were completely impressed by all the music, as were we. And the dancing. Check it out!