Rosa Parks bikes rolling in… every day is like a cargo bike roll call!

San Francisco schools start mid-August, so we’ve been taking our son in for a week now. Now that our daughter is finally in a new preschool (at a Japanese immersion program a few blocks from Rosa Parks that we love) we have, for the first time ever, a shared commute. And for the new school year, there are new bikes to see as well. We arrived early on the first day of school, and we had to rent a car because our daughter woke up vomiting, but there were plenty of bicycles to see nonetheless. 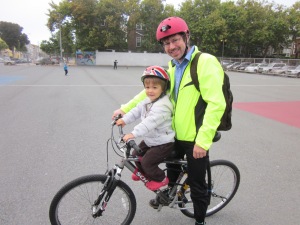 Last year I wrote about the Oxford Leco top tube seat, and we were lucky enough that friends from Rosa Parks picked up for us one while they were in the UK. Circumstances conspired, so we have not installed our seat, but they are already using theirs. On the first day of school it was carrying their son (who goes to preschool with our daughter) but this is typically the way they take their daughter, now in the first grade, to school. They told me that the kids fight for the chance to sit in the front seat, which does not surprise me: front seats are fun!

This bike is too fast to catch in motion.

For a couple of years another family was also using an ad hoc top tube seat in the form of a spare saddle stuck on the top tube, but their daughter, in 2nd grade, has grown too tall for this option. Now she rides behind her dad, standing on the foot pegs he’s installed on his rear wheel and holding onto his shoulders. I continue to be impressed at the way he’s managed to haul a kid for six years now with the absolute minimum cost and hassle. They cut a mighty figure rolling through the streets—since he’s kept his bike so light they move very fast, unlike those of us on cargo bikes.

This is the second BionX Mundo I’ve seen at Rosa Parks.

At the welcome breakfast for new families there were: more bikes! And check out that newly assisted Yuba Mundo with BionX. This particular rack usually holds kids’ bikes that have been disengaged from their Trail-Gators and are locked up until the parental pick up later in the day, rather than this collection of parental bikes, because it’s inside the locked courtyard.

There is so much awesome in this bike that I cannot do it justice.

Most impressive of the new bikes was the Xtracycled tandem! This is the same family that formerly rode the Bike Friday triple tandem (aka Shrek 2). Their oldest is now riding solo, so they swapped the triple tandem for the Xtracycle tandem, and now they can carry three kids. And they do: they are the neighborhood bike-pool.  Cargo bikes may be slow, but have their uses.

This is the way we ride to preschool.

And although we did not ride to school on Monday due to sick kid, we did ride for the rest of the week. I took our daughter to preschool solo twice last week, and picked her up too. I still get tired much too easily, so I can’t ride every day, or for that matter go to work every day (I’m still on half-time disability). Yet riding is still easier than driving+walking—even with my handicapped parking sticker, we can rarely park close enough to our destination that it’s an easy walk for me. People are still surprised to see me on the bike again, but riding is still so much easier than walking that it almost feels like cheating.

Even more astonishing, I’m not the only one back in action.