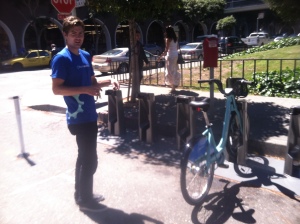 The first bike arrives at the bike share station.

This Friday is the opening day for Bay Area Bike Share. I knew, idly, that it was coming, but hadn’t really paid much attention, as the station route map reveals it is too far east for me to use much. I forgot, of course, that Matt works downtown. There is a new bike share station right outside his office! My sister has one outside both her home and her office (and mystifyingly, she does not plan to join. Yet.)

Of course Matt rides to work already, but riding a big cargo bike around the Financial District is not always the most convenient option, especially since one time that he did that, his (U-locked) bike was stolen. At noon. In a location with lots of foot traffic. By a thief using a handheld angle grinder.  At work, we can bring our bikes inside. Personally, if I had the option, I’d leave my bike inside all day and ride a bike share bike to meetings when I needed to leave the office. I think a docking station is designed to lock up a bike better than I ever could, and I suspect that it would be too tough to sell a bike share bike to make stealing one tempting. Not that it matters, because stolen bike share bikes wouldn’t really be my problem anyway.

Although I am not in the neighborhood and I can’t haul my kids on a bike share bicycle, I will eventually make it over to that part of the city (which is flat!) and try one out. You’ll hear about it here first.

However the grand opening of bike share is not the only reason that this will be a great weekend. This is also the long weekend of the empty city. On Wednesday night, the Bay Bridge was closed so that Cal Trans can transition the earthquake-damaged eastern span over to the new bridge. Virtually all of the traffic from the East Bay has evaporated. I noticed even this morning that there were far fewer cars on the road, which is always welcome. We have had this experience before during bridge closures, as well as on Thanksgiving and Christmas—visitors leave the city, and everything is suddenly completely accessible to those of us who live here. Restaurant reservations are available all evening and the lines at museums disappear. I’m sure that it’s not great for business, but it’s sometimes nice to have the city be a place just for its residents. Happy Labor Day!

One response to “Bay Area Bike Share in an empty city”