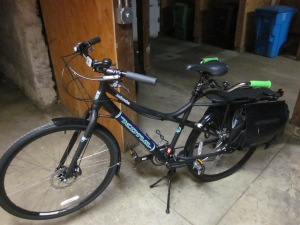 The same bike, but different

Although I have some issues with our original cargo bike, the Kona MinUte, they are mostly along the lines of “this is a good bike that with a little bit more effort could have been a GREAT bike.” If I were a betting person, I would bet that the MinUte is a product that is only really loved by one person at Kona, which as a company seems to focus more on what another family biker once referred to as “the weed market.” I wish this were not the case, but in the meantime, Kona pioneered the first American midtail, and what a great idea that turned out to be.

So I was very disappointed to learn that Kona is discontinuing the MinUte at the end of 2013. I recommend the Yuba Boda Boda to parents looking for an assisted midtail in San Francisco (that’s mostly moms), with the usual caveat about Yuba’s lower-end parts. I recommend the MinUte to parents looking for an UNassisted midtail in San Francisco (that’s mostly dads), with the usual caveats about the MinUte’s historically horrible brakes. There a couple more midtails out there, but to date I have not yet ridden a Kinn Cascade Flyer, so I can’t comment on anything but its smokin’ good looks one way or the other. And the very sturdy Workcycles Fr8 is not appropriate for our hilly neighborhood, plus it is too heavy for bus bike racks on local transit, so it loses one of the key advantages of owning a midtail. On the other hand, if you live somewhere flat, the Fr8 is the only midtail specifically designed to haul three kids, one of whom can be in front, which is delightful.

Although it is not a company that is focused on the kid market, Kona does some things really, really well, and one of them is gearing. The MinUte is geared like a mountain bike, so yes indeed you can haul your 50+ pound kid up really steep grades on this bike. And with an aluminum frame, the weight of the bike isn’t fighting you all the way up those hills. To the best of my knowledge, there is no other cargo bike with the same weight+gearing advantage currently on the market. RIP, MinUte. If you’ve been thinking about getting one, you’d better hustle. 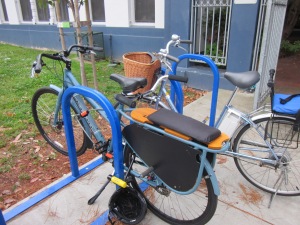 The things that irritate me about the MinUte would probably be irrelevant if the family cargo biking market hadn’t taken such great leaps in the last few years. Now you can buy a bike that comes with kid-carrying parts designed for the bike. Workcycles, Xtracycle, and Yuba will not let you down on this front, and that makes their bikes inherently more appealing for a parent picking up cargo biking. Getting a MinUte involves some kludging that feels a little old-school now. If you live near our bike shop, Everybody Bikes, or one like it, they’ll do that for you, because they’ve set up so many of these bikes already, but otherwise you’re on your own. Kona does not have a standard set of stoker bars for kids to hang on to, wheel skirts to keep feet from being trapped in the spokes, or pegs for foot rests. If you buy a MinUte from Everybody Bikes they’ll set up you up with all of these things on request, and it will look really good too, but that’s their initiative and not Kona’s.

But we live in a hilly neighborhood near this particular bike shop, so it’s not just us on a MinUte: we have neighbors with MinUtes as well, and one family joins us at Rosa Parks every morning—how cool is that? For parents with one kid or two widely spaced kids, a midtail is probably the best kind of cargo bike. Granted, you don’t really need a cargo bike with only one kid, but it can be handy—I find a midtail less unwieldy than a bike seat with an older child, plus you can carry more non-kid cargo. Matt likes the MinUte’s carrying capacity so much that he plans to keep riding it after our kids are on their own bikes. Assuming, that is, it is not stolen again after Kona stops making them, which would break our hearts.

And as mentioned, most midtails can go on a bus bike rack, or on Amtrak using their standard bike racks. Score! Lifting them up to a bus bike rack is not without its challenges—the MinUte, which is the lightest one I’ve tried to put on a bus, is definitely a lot of work to position, but eh, there are lots of heavy bikes in the world, and in my own personal case, my arms are not the weak link. 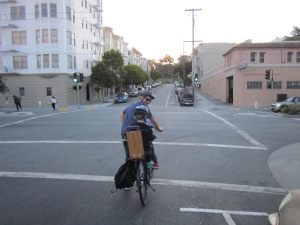 This neighbor DIYed a nice kid seat with a wooden back, which is drilled directly into the wooden deck.

When we got the replacement MinUte, we learned that Kona had not ignored all of the issues that came up with the first year’s model. The MinUte now has a much nicer centerstand than before, only a fraction narrower than the best-in-class Ursus Jumbo at half the price. Kona now allows you to swap out the standard wooden deck for a plastic deck with holes predrilled to hold a Yepp seat. I’ve been told that the standard brakes are better. The bags are still not so great, but hey, they are included in the price of the bike, so it’s hard to complain too loudly about that. Again, it’s really more a good thing that could have been great.

We will miss being able to tell people where they can buy a MinUte like ours—although the Bullitt gets the most attention, all our bikes are kid-haulers, and as a result they all get noticed. I wish Kona were willing to jump into the family market wholeheartedly. The MinUte fills a niche for families in hilly cities and I’m not sure there’s another bike out there yet that can do the same thing. But Kona is discontinuing the MinUte, so I will have to hope there is something new in the works.

19 responses to “The underrated Kona MinUte”