He can remember a stick and headlamp for a camping trip, but remembering jackets or a bike helmet: boring.

The other day when I picked up my son at his after school program, he ran over and started to hop aboard. “Where’s your helmet?” I asked. “Uh…” he said. “I guess I left it at school.”

This is not the first time that’s happened. Kids forget stuff. In the first year of kindergarten our son lost so many jackets we finally lost all patience and sent him to school in shirt sleeves in January (recall that we live in San Francisco: he was chilly but we’re not monsters). At that time, he was taking a school district bus to his after school program and they took all lost items to their central facility on the southeastern edge of the city. Those jackets were gone forever.

Our problems are compounded by the fact that his dad drops him off, and then he goes to an off-site after school program where I pick him up, but it happens even when we pick up our daughter, who stays in the same location all day but is missing one sock at pickup three days out of every five.

So what do we do when our kids forget their helmets? We take it on the chin. California has a helmet law for kids but not for adults, our kids have giant heads, and our helmets are adjustable. I give my son my helmet and I go bare. I don’t like doing this, AT ALL—I mean, I’m still recovering from being run over and I am basically still the world’s most paranoid bicycle rider—but it’s often the best of the available options. Some of our bikes fit on a bus bike rack, and we have done that once with a forgotten helmet, but it takes an extra half hour that we don’t always have.

As a parent, though, handing off your helmet to your kid for the ride home is a guaranteed ticket to heckling. People stop next to me and yell, “Where’s your helmet, mom?!? COME ON!” And I always reply wearily, “He left his helmet at school so I gave him my helmet.” And they say, “Oh.” But I know there are hundreds more people who say nothing right then but remain righteously indignant that there are parents! Who don’t wear helmets! Setting a bad example! On the streets! WHAT IS WRONG WITH THESE PARENTS!!! I see them at community meetings and they sure do fire up the internet. 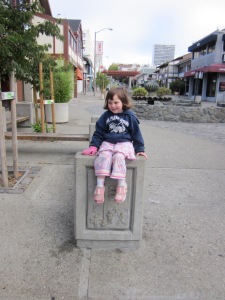 We notice the world when walking to school too, like these carvings in Japantown.

Being on a bicycle sometimes means that you can’t hide from your surroundings. That’s often a good thing. I like riding a bike in part because we’re engaged with the world around us. I like being aware of the weather outside, even if that means wearing rain gear. But while parents in cars don’t have to reveal that they forced a screaming toddler into that car seat or that they forgot the booster seat for the friend who they promised to take home, on a bike there’s no way to keep the world from seeing, and a lot of people don’t shrink from sharing their opinions. I don’t care about it that much, but at the end of the day when I am already tired, the judgment can get old. I don’t peek in car windows and criticize other people for putting a five year old in the front without a car seat, so it would be nice to get a break on the days my son forgets his helmet.

We live in a country where it seems normal that a kid on a balance bike at Sunday Streets–where there are no cars–would wear a helmet. I would like that to change.

It would of course be even better to live in a place with safe infrastructure like a network of protected bike lanes, and laws that protected vulnerable road users, and 15mph speed limits, so that we wouldn’t even need helmets. But who am I kidding.

5 responses to “Where’s your helmet, mom?”